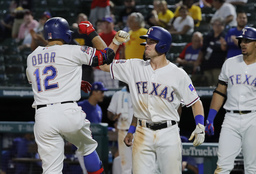 ARLINGTON, Texas (AP) Tampa Bay now has the slimmest of possible leads for the AL's top wild-card after a big comeback that was thwarted by some bad baserunning and Rougned Odor's big blast.

Odor hit a go-ahead, three-run homer in the seventh, after the Rays had two runners picked off in the top of the inning, and the Rangers held on for a 10-9 win Wednesday night to end Tampa Bay's six-game winning streak.

"We ended some opportunities, some scoring opportunities with probably some over-aggressive baserunning," said manager Kevin Cash, whose team earlier had runners caught stealing on unusual plays in consecutive innings.

Tampa Bay (87-60) had its lead over Oakland for the top wild-card spot trimmed to a half-game after the A's won at Houston. The Rays had won 11 of their previous 12 games. Cleveland trails Tampa Bay by one game.

After their first seven-run first inning at home in 13 years, the Rangers didn't score again until Odor's 25th homer in the seventh. That came off Nick Anderson right after he had replaced Colin Poche (4-5), who had allowed a single and a walk with two outs.

"He shouldn't have ever been in that situation in the first place. Anytime you get two quick outs like that, you've got to finish the inning," said Poche, the sixth of eight Rays pitchers. "It's not fair to him to maybe have to rush to warm up to get ready to come and bail me out of a situation that we shouldn't have been in."

Matt Duffy's two-out RBI single in the first gave the Rays a 2-0 lead. They tied the game at 7 on Ji-Man Choi's three-run homer in the second, and went ahead 8-7 when Duffy hit a sacrifice fly to deep center with the bases loaded in the fourth.

Rookie right-hander Ian Gibaut (1-0), the fifth Texas pitcher, threw two scoreless innings for his first big league victory. Jose Leclerc worked the ninth for his 12th save in 16 chances despite giving up Choi's second homer of the game that took just over four hours to play.

Duffy was at third base in the second when catcher Jose Trevino came out of his crouch, did a fake pump throw to second and got Duffy in a 2-5-1-6 rundown. After Guillermo Heredia drew a leadoff walk in the third, he was picked off when first baseman Ronald Guzman chased him almost all the way to second base before applying the tag.

"We got some free outs when we needed them, and it obviously helped us win the game," Rangers manager Chris Woodward said.

Then in the decisive seventh, after consecutive walks to start the inning, Trevino got Choi at second, on a play when the runner was initially called safe before a replay challenge. Gibaut then picked off at first speedy pinch-runner Johnny Davis, who made his big league debut after leading the Mexican League with 54 stolen bases.

Tampa Bay began the second inning with three consecutive doubles before Choi's 14th homer made it 7-all.

"That was impressive. Really, really encouraging what we did. We got down, and obviously we were frustrated," Cash said. "We came up short tonight. ... Let's get back on a roll because we've been playing good."

Tampa Bay's first two pitchers combined to throw 41 pitches before finally getting an out.

Nomar Mazara, back in lineup after missing seven games with a strained left oblique muscle, had an RBI single to tie the game at 2-all. The Rangers went ahead on a two-run single by Danny Santana to make it 4-2 before the first out. Elvis Andrus had an infield RBI single that was his second hit of the 55-minute inning for a 7-2 lead.

The last time the Rangers had a seven-run first at home was in August 2006 in a 14-7 win over Seattle. It matched their most runs in any inning this season.

Bayron Lora, one of the top international prospects, took batting practice after passing his physical with the Rangers. The 6-foot-3 outfielder from the Dominican Republic, who turns 17 on Sept. 29, had previously agreed to a $3.9 million signing bonus. Lora will now go to the Arizona Instructional League.

Rangers: All-Star slugger Joey Gallo (right wrist surgery) will work out with the Rangers through Friday, then go to Arizona for some simulated games and the Arizona Instructional League. If all goes well, he will be activated by Sept. 20 for the final nine games of the season.

A pair of rookie left-handers will be on the mound when Tampa Bay's two-way Brendan McKay (2-3) makes his 10th start, and Kolby Allard (4-0) goes for the Rangers. Allard has won his last three starts, allowing only three runs in 18 1/3 innings over that span.