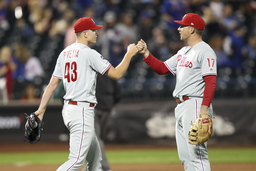 NEW YORK (AP) The Phillies and Mets are short on time in the NL wild-card chase - and their fans are surely short on patience, too.

A night after Philadelphia's bullpen walked home the winning run in the ninth inning, it was New York's glove work that looked unfit for October.

Drew Smyly pitched seven solid innings, and the Phillies pounded down on Marcus Stroman and the Mets' porous defense to beat New York 5-0 Saturday and end a three-game skid.

Cesar Hernandez led off the game with his ninth homer, and Philadelphia overcame three errors and the absence of star Bryce Harper a day after he was hit in the right hand by a fastball. The Phillies are three games back of the Chicago Cubs for the second NL wild card with about three weeks left in the season. They entered the day tied with the Mets.

"I think we know that we've been written off, and we don't care," Phillies manager Gabe Kapler said. "We're going to keep fighting."

The Mets played sloppily behind Stroman (7-13), with third baseman Todd Frazier misplaying a popup and left fielder J.D. Davis letting a routine fly bounce out of his glove. The right-handed Stroman was pulled trailing 5-0 after four innings. He allowed 10 hits and struck out six without issuing a walk.

Philadelphia's bullpen lost the club's previous two games via walk-offs - including Nick Vincent's bases-loaded free pass to Pete Alonso on Friday - but Smyly (4-6) left the relievers an easy task. He worked around three errors, including consecutive goofs by third baseman Brad Miller in the fourth, by limiting New York to four hits and striking out six.

"Smyly went out today and pitched like he didn't have a care in the world," Kapler said. "Like he had something to prove."

The 30-year-old Smyly returned to the majors this year for the first time since 2016 following Tommy John surgery, but he was released by Texas in June and opted out of a minor league deal with Milwaukee in July. He signed with Philadelphia and is 3-1 with a 3.93 ERA in nine starts since.

"Physically, I feel really good," Smyly said. "I feel like I've been getting on a roll. Three weeks left, and we all have to finish strong. Everyone in here knows where we're at."

"I just took my eye off the ball," Davis said.

J.T. Realmuto and Corey Dickerson followed with RBI hits to lead 5-0. The Phillies' 1-2-3 hitters - Hernandez, Realmuto and Dickerson - were 8 for 9 with five RBIs against Stroman.

Stroman dropped to 1-2 with a 5.05 ERA in seven starts since being acquired from Toronto, where he was an All-Star this season.

"I just haven't been myself here," he said. "I'm never going to get discouraged. I'm going to do everything in my power to work it out and get back to being who I am."

New York also loaded the bases in the first, but right fielder Adam Haseley sprinted into the gap and made a leaping catch on Frazier's two-out drive to the warning track.

"Haseley's play in right-center field is a game-changing moment for us," Kapler said.

After being stifled that inning, New York only advanced one more runner past second base and went 0 for 11 with runners in scoring position.

"We need to win these games in order to be in the playoffs," Alonso said.

Anthony Kay - shipped to the Blue Jays when New York acquired Stroman - matched a Toronto record by striking out eight in his major league debut Saturday against Tampa Bay. He pitched two-run ball over 5 2/3 innings.

Phillies: X-rays on Harper's hand were negative and Kapler was confident there were no fractures. Kapler called the day off a "precautionary measure."

Mets: INF Jed Lowrie was active for the first time this season after dealing with various lower body injuries. Lowrie signed a $20 million, two-year free agent deal in January. He struck out pinch-hitting for Stroman in the fourth. ... 1B/OF Dominic Smith said he has a stress fracture in his left foot, not a stress fracture as initially diagnosed. He hopes he can return for the final week of the regular season. He was transferred to the 60-day IL to make room for Lowrie. ... RHP Drew Gagnon was recalled from Triple-A.