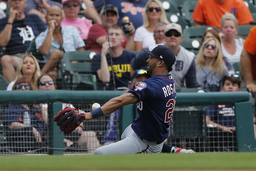 DETROIT (AP) The Minnesota Twins' path to the playoffs is getting a boost on the road.

Max Kepler hit a two-out, two-run single in the eighth inning and the AL Central-leading Twins topped the Detroit Tigers 4-3 on Monday.

The Twins have gone 6-1 in the first seven games of a 10-game road trip. They began the day 5 1/2 games ahead of Cleveland in the division.

"We are so versatile, and that gives us a lot of ways to win games," Kepler said. "We can do it all."

Detroit went 1-6 in its seven-game homestand.

Trailing 3-2, Minnesota started the eighth with two singles off Buck Farmer (5-6). He retired the next two batters, but Ehire Adrianza's infield single loaded the bases for Kepler.

"I just wanted to make hard contact," he said. "It's pretty special to get a hit like that to help win a game at this time of year."

Sergio Romo and Taylor Rogers retired the final six Tigers hitters, with Rogers picking up his 22nd save. Zack Littell (3-0) got the win after pitching a scoreless seventh.

"It didn't come easy, but we kept playing well, pitching well and making plays," Twins manager Rocco Baldelli said. "Not every game is going to come down to a lot of homers and a big victory margin."

Tigers starter Jordan Zimmermann, relying heavily on the sinker he started throwing after the All-Star break, gave up two runs on nine hits in six innings.

"It is really turning into a pitch I can count on in key situations," he said. "When I need a groundball, I have the confidence to throw the two-seamer and get one."

"We're not always going to score 10 runs, so we have to help find a way to win games like that," he said. "Any time I go out there and we win, I consider it a success. I didn't win, but the team did. That's the only stat I care about - how often we win when I pitch."

Miguel Cabrera hit a solo home run, his 10th, in the Detroit first. Adrianza put Minnesota ahead with a homer in the second.

Detroit rallied in the fifth, starting the inning with three singles to tie the score. Jake Rogers bunted the runners to second and third and Victor Reyes hit a sacrifice fly to put Detroit up 3-2.

The Tigers had chances to add on runs in the sixth and seventh innings. In the sixth, they had runners on second and third with one out before Tyler Duffey struck out Dawel Lugo and Jody Mercer.

In the seventh, Willi Castro hit an infield single off Littell with two out, but Reyes was thrown out trying to score from second.

"We had some good swings early against Odorizzi, which I liked to see," Tigers manager Ron Gardenhire said. "We just missed some chances to add on runs against their bullpen and it hurt us."

Tigers minor league catcher Chace Numata died Monday, days after being injured in a skateboarding accident. He was 27. Numata, who was playing for Double-A Erie, was found unresponsive Friday morning by police in the northwestern Pennsylvania city. Numata was in his first season in the Detroit organization. He batted a combined .244 with four home runs and 28 RBIs with Erie and Triple-A Toledo.

Twins: C Mitch Garver left the game in the fourth inning after a pitch deflected off his glove into his jaw. The pitch was originally ruled to have hit Harold Castro, but it was overturned by a replay review. Garver is listed as day-to-day with a sore jaw.

Tigers: C John Hicks was a late scratch due to illness and replaced by Rogers.

With Triple-A Toledo's season ending on Monday, the Tigers announced the rest of their September callups, all of whom had been with the team earlier in the season. OF Christin Stewart, 3B Jeimer Candelario, C Greyson Greiner, LHP Tyler Alexander, LHP Daniel Stumpf and RHP Zac Reininger will join the team for its trip to Kansas City.

Twins slugger Nelson Cruz has always hurt the Tigers, both in the regular season and postseason. He was thinking about Detroit as all Twins players were all scheduled to wear NFL jerseys on their flight to Boston. Cruz provided the ones worn by the team's rookies - they were all Lions jerseys, representing the franchise that has one playoff win since 1957.

Twins: Minnesota begins a three-game series at Boston on Tuesday. Rookie Randy Dobnak, who was signed in 2017 out of a Detroit-based independent league, will be facing Rick Porcello (12-10, 5.42).

Tigers: Detroit travels to Kansas City for three games against the Royals. Daniel Norris (3-11, 4.66) will start for the Tigers on Tuesday against Mike Montgomery (3-7, 4.66).