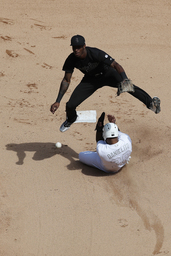 CHICAGO (AP) Reynaldo Lopez shut down the Texas Rangers before a stomach bug got the better of the White Sox right-hander and shortened a sensational afternoon.

Lopez pitched five no-hit innings before leaving with dehydration and flu-like symptoms, and the Chicago went on to beat Texas 2-0 on Sunday.

Aaron Bummer replaced Lopez to start the sixth. The first batter he faced, Shin-Soo Choo, lined a single to left on a 1-0 pitch for the Rangers' only hit.

Lopez told reporters through a translator after the game that he had been battling GI issues for three days. He felt good enough to take the mound Sunday, but by the third inning sensed his stuff was livelier than his body.

"I tried to battle through it until Ricky (manager Renteria) made the decision," said Lopez, who felt better after taking IV treatment. "It is frustrating when things like that happen the day that you are pitching, especially an outing like today when everything was going very well.

"I was kind of upset when I had to leave the game. I was feeling good with my stuff, but physically I wasn't doing well."

Jose Abreu drove in both White Sox runs to reach 100 RBIs for the fifth time in six seasons. Adam Engel had two of Chicago's five hits.

Lopez (8-11) struck out six and allowed four baserunners while throwing 52 of 80 pitches for strikes. The righty walked two and hit Nick Solak with a pitch. Jose Trevino reached on the first of two errors by shortstop Tim Anderson.

Lopez rebounded from two straight losses when he allowed eight runs in 12 innings. In his last nine starts, the 25-year-old is 4-3 with a 2.82 ERA.

"He certainly was the story. It was nice job by the bullpen to be able to pick him up."

Bummer, Evan Marshall, Jace Fry and Alex Colome followed with a scoreless inning each. Colome worked around a walk in the ninth to earn his 25th save.

Brock Burke (0-1) nearly matched Lopez in second major league outing, yielding one run on two hits while walking three and striking out five. The 23-year-old left-hander tossed six scoreless innings and scattered four hits in his debut last Tuesday against the Angels, but ended up with a no-decision as Texas won 3-2 in 11 innings.

The White Sox loaded the bases with one out in the first, but Burke escaped the jam when Eloy Jimenez lined into a double play.

"Today was really encouraging, especially with how the game started," Texas manager Chris Woodward said. "I'm still baffled by the poise that this kid has. Bases loaded, one out and guy hits rocket to the shortstop. He gets out of it.

"Then he comes back in and is calm. It's a little big staggering in his second big-league start to be calm in that setting."

Chicago took a 1-0 lead in the third on Abreu's RBI single to left. Yolmer Sanchez, who walked to lead off the inning, trotted home from third after he advanced on a bunt and an error.

Lopez's reached over his head and snared Elvis Andrus' liner up the middle for the first out of the fourth.

After Choo singled in the sixth, the Rangers loaded the bases with two outs on Anderson's second error of the game and an intentional walk to Solak. Rougned Odor grounded out to end the threat.

Choo didn't make much of ending the no-hit bid.

I got a hit in the sixth inning and I saw the scoreboard in the ninth inning and saw we had one hit," he said. "That's part of the game."

Engel scored from third on Abreu's soft grounder in the seventh make it 2-0.

Abreu's said he called his mother, who follows his stats, about reaching the 100 RBI mark again after the game.

"I got off the phone with my mother, telling her thank you," Abreu said through a translator. "I am who I am because of you and this is for you."

Rangers: OF Hunter Pence (lower back tightness) was out of the lineup for a second straight day. The injury occurred Friday in the batting cage, but Pence played through that game going 0 for 3

White Sox: OF Leury Garcia left the game with a left shin contusion. . Rookie OF Eloy Jimenez was the designated hitter for a second straight game as he eases back into the lineup following a bout of right hip flexor soreness. . LHP Fry was reinstated from the paternity list and pitched a perfect eighth.

White Sox: Ace RHP Lucas Giolito (14-6, 3.20) takes the mound on Tuesday against Twins RHP Michael Pineda (9-5, 4.26) in the opener three game series in Chicago. Giolito shut out the Twins on three hits and struck out 12 at Minneapolis last Wednesday. Pineda is 3-0 in his last four starts.