Jordan Lyles a winner in return to Brewers, 4-2 over A's 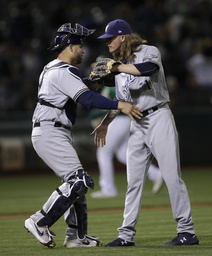 OAKLAND, Calif. (AP) Back with the team he helped to an NL Central title a year ago, Jordan Lyles certainly looked a lot more comfortable in his return to the Brewers than he did the previous two months in Pittsburgh.

Now, he's hoping to pitch Milwaukee back into the postseason.

Lorenzo Cain hit a leadoff homer and Lyles won for the first time in more than two months as the Brewers beat the Oakland Athletics 4-2 on Wednesday night.

"It was obviously a lot different than a normal start day," Lyles said. "Hadn't been too long since I was in this clubhouse with them. I was definitely looking forward to coming in today. A breath of fresh air, a new start in a division race. New life, I guess you could say."

Acquired from the Pirates on Monday for pitching prospect Cody Ponce, Lyles (6-7) tossed three-hit ball over five innings. He worked out of an early jam in the second, allowed a run in the third and then retired nine of the final 10 batters he faced. The right-hander struck out four and walked two.

Lyles was a reliever for the Brewers late last season, going 1-0 with a 3.31 ERA in 11 appearances. The win was his first since May 23.

"He was excellent," Milwaukee manager Craig Counsell said. "Tonight was Jordan pitching really well. It was simple stuff. This is a Jordan Lyles game. This is how he pitches."

Jurickson Profar had two hits and an RBI for Oakland.

Hours after completing a pair of trades that sent slumping slugger Jesus Aguilar to Tampa Bay and added lefty Drew Pomeranz to Milwaukee's bullpen, the Brewers grabbed an early lead against A's starter Brett Anderson and held on behind Lyles and four relievers.

"We made some quality pitches, fastballs mainly, up in the zone to get ahead," Lyles said. "Didn't put guys away as quickly as I wanted to. But for the most part we didn't have too much traffic, we worked pretty quickly, so I'm happy about that."

Matt Albers, Jeremy Jeffress and Junior Guerra each pitched a scoreless inning. Josh Hader allowed a two-out single to Profar in the ninth, then got Marcus Semien to pop up for his 24th save.

Cain homered on Anderson's second pitch. Yelich doubled home Arcia in the third and Mike Moustakas hit a sacrifice fly in the fourth to make it 3-1.

"It's been a struggle for us to score early," Counsell said. "Playing with a lead was important."

"He got off to a little bit of a slow start with the home run, but at the end of the day he gives up three runs and pitches seven innings," A's manager Bob Melvin said. "Once he kind of finds his arm slot he gets a lot of ground balls and soft contact."

NOT BAD FOR AN MVP

Yelich is batting .370 with five home runs and 14 RBIs during his 18-game hitting streak.

DEALING AT THE DEADLINE

As expected, both teams made moves to bolster their pitching staffs before the trade deadline Wednesday afternoon.

Oakland landed starter Tanner Roark from Cincinnati in a deal that sent outfield prospect Jameson Hannah to the Reds. Roark is likely to start Sunday against St. Louis.

Brewers: Gio Gonzalez avoided the injured list and will throw a bullpen Thursday morning. If all goes well, the left-hander will start Saturday against the Chicago Cubs. Gonzalez left his previous outing last Friday against the Cubs with tightness in his pitching shoulder.

Athletics: Sean Manaea struck out eight in six innings of a rehab start with Triple-A Las Vegas on Tuesday night. The lefty is likely to get one more rehab start before being activated. He had shoulder surgery last September. ... CF Ramon Laureano was placed on the injured list with a stress reaction in his right calf. ... A's catcher Josh Phegley also went on the IL, retroactive to Monday, with a bruised left thumb.