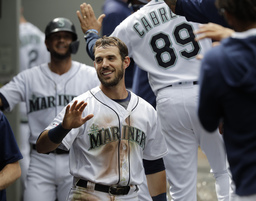 SEATTLE (AP) After spending eight years in the minors, Ryan Court started this season on an even lower rung - in an independent league, still hoping for his big chance.

Which made his performance Saturday mean so much more.

The 31-year-old utility player got two hits and drove in three runs as the Seattle Mariners beat the Detroit Tigers 8-1.

He also got a postgame dousing from his teammates.

"The Gatorade was awesome," Court said. "It's cool. Very cool."

Court became just the third rookie in Mariners history to record two hits and three RBIs over his first two games, and the first since 2004.

Court teamed up with fellow rookie Austin Nola - one of three first-year players in a lineup that also included shortstop Dylan Moore - to power a three-run rally in the fourth to take a 3-1 lead.

And they helped put together a four-run fourth that put it out of reach for the reeling Tigers, who lost their fifth game in a row and fell 40 games below .500. At 30-70, they've been held to one or fewer runs 22 times this season.

Court drew a standing ovation from an appreciative crowd after his first hit and spent time with his parents and girlfriend, who made the trip to see him play, before speaking with reporters.

There hasn't been a lot of cheer about for the Mariners in what's been characterized as a step-back season. Court is the 13th rookie to make his debut and the major league-leading 58th player to suit up the Mariners.

Still, manager Scott Servais has been able to enjoy days like this.

"I enjoy it, I really do," Servais said. "I enjoy giving guys opportunity and seeing how they handle it, see what they can do. A lot of these guys have had a long journey to get here, to get this opportunity, so it's fun. Everybody's chipping in, everybody's contributing."

Nola hit a two-run triple in the fourth inning and Court, who lined out as a pinch-hitter a day earlier in his debut, had an RBI single for his first hit and a 3-1 lead.

Nola added an RBI double in the four-run seventh inning and Court matched him with a two-run, ground-rule double to make it 8-1. Court also played right field and first base.

Omar Narvaez had four hits for Seattle and Tim Beckham doubled twice, singled and scored two runs. The Mariners have won four in a row for the first time since April.

Marco Gonzales (12-8) is 7-2 in his last nine starts since June 7. He's given up more than three runs just once in that stretch. He scattered six hits over seven innings and didn't walk a batter for the second start in a row.

Tigers starter Tyler Alexander (0-1) struck out nine, but only made it through 4 1/3 innings after giving up eight hits and four runs.

The Mariners ended up with a season-high 16 hits and will go for a series sweep on Sunday.

Detroit is 1-14 against the AL West this year.

"We're trying to find a whole bunch of stuff and nothing is working," Tigers shortstop Jody Mercer said. "So if you guys have any ideas, let us know because we'd like to have them."

Rookie infielder Tim Lopes returned to the Seattle clubhouse for the first time since taking a fastball to the jaw Thursday. Lopes, who's on the seven-day concussion list, said he was beginning to feel clear-headed with more energy and believes he'll be ready to go on Aug. 2 when he's eligible to be activated.

Lopes stole a base, scored a run and played two more innings after Detroit's Drew VerHagen hit him. He said his ear flap took most of the impact.

"It definitely is not how I pictured my first start to go," Lopes said. "I was really excited to be out there, out there with my teammates, and just experience being a major league baseball player. It's been my dream since I was a little boy. So that's the part I definitely think about more, is just that my dream came true these past couple days."

With two starting outfielders injured, the Mariners claimed Keon Broxton off waivers from Baltimore. Broxton was designated for assignment on July 21. He started the season with the New York Mets, playing 34 games before being acquired by Baltimore for international bonus pool money. He's batting .184 in 71 games.

The Mariners moved reliever Connor Sadzeck (right elbow inflammation) to the 60-day injured list to make room on the roster.

Also, the Pittsburgh Pirates claimed reliever Parker Markel off waivers from the Mariners. He was designated for assignment on July 23.

The Mariners or their opponents failed to hit a home run in a game for the first time this season, ending a major league record streak of 107 games in which at least one team hit a homer in a Seattle game.

The previous record of 69 games was held by three teams: the 1985 Orioles and the 2017 Chicago White Sox and Texas Rangers.

Mariners: Dee Gordon could be ahead of schedule for a return from a right quad strain. The knot in his muscle has resolved and Servais said he'd likely begin baseball activities again when the team heads out on the road next week. He's eligible to return Aug. 2. . Domingo Santana returned to the lineup as a designated hitter, hitting in the No. 2 spot. He is not throwing and will not return to right field until inflammation in his right elbow subsides. . Closer Hunter Strickland has cleared the final hurdle in his return from a right lat strain that put him on the 60-day injured list and will make his return to the roster Sunday or early in next week's road trip.

Mariners: Seattle will use an opener and then turn to LHP Tommy Milone (1-5, 4.45 ERA). Milone is trying to snap a four-game losing streak.