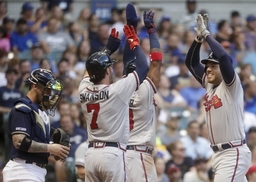 MILWAUKEE (AP) One pitch was all Freddie Freeman needed to power the Atlanta Braves to their fifth straight victory.

The left-handed slugger sent an offering from Milwaukee Brewers starter Adrian Houser deep to center field to bring home three of the Braves' four runs in a 4-2 win Monday night.

"We've been clicking for two months now," Freeman said. "None of this surprises anyone in this clubhouse. We are playing really good baseball."

The homer marked Freeman's 25th of the season and helped the first-place Braves improve to a season-best 21 games over .500.

Freeman is the fastest player in Braves franchise history to reach 25 homers since Andruw Jones in 2005. Freeman reached the mark in 95 games. It took Jones 78 games.

"I thought it was smart not trying to pitch through it," Snitker said. "It was pretty significant. If he hadn't have said anything and kept pitching, it probably would have torn open."

Fried is now 2-0 with 11 shutout innings pitched against Milwaukee this year.

Freeman's home run put Atlanta on the board first in the fourth. The blast scored Ronald Acuna Jr. and Darby Swanson who each reached on a base hit.

The Braves improved to a major-league best 40-17 since Snitker moved Acuna Jr. to the top of the order on May 10.

Houser (2-4) fell to 0-4 as a starter this season after allowing four earned runs on eight hits in six innings.

"We just gotta make more plays," Brewers manager Craig Counsell said. "That's what it comes down to. Whether it be better at-bats and stuff or just making a play defensively (or) making a big pitch when it counts. ... We gotta find a way to make plays. That's how we kind of break through this. Just make more plays. That's the only way to do it."

Ryan Braun hit his 13th home run of the season in the sixth and Keston Hiura brought home the Brewers' other run on a deep drive to center that fell just beyond the outstretched glove of Acuna Jr. The RBI triple pulled Milwaukee to within 3-2.

Austin Riley singled on a fly ball off Braun's glove in the seventh. The base hit scored Ozzie Albies.

Christian Yelich had two hits on the night and added a stolen base, his 22nd of the season.

Luke Jackson pitched the ninth to earn his 17th save of the season.

Brewers left-hander Gio Gonzalez pitched 4 2/3 innings, allowed one run on five hits and struck out four in a rehab start Monday for the Triple-A San Antonio Missions. Gonzalez also surrendered a home run in the start against Nashville. Gonzalez threw 68 pitches, 44 for strikes. The two-time All-Star hasn't pitched for the Brewers since being placed on injured list June 1 with left arm fatigue.

Brewers: RHP Corbin Burnes (right shoulder irritation) was placed on the 10-day injured list. Burnes (1-5), who suffered his fifth loss of the season Sunday after allowing four earned runs on four hits while facing just four batters, said his shoulder was bothering him for four or five days but Sunday was the first day he felt it while on the mound. Counsell said he doesn't believe Burnes' injury is serious but said he'll shut him down for what he doubts will be a long time.

Brewers right-hander Brandon Woodruff (10-3, 3.67 ERA) will face right-hander Bryse Wilson (1-0, 6.14 ERA) on Tuesday in the second game of the three-game series. Woodruff lost his last start July 4 in Cincinnati after allowing just one earned run in six innings of work. Wilson will be recalled from Triple-A Gwinnett. Tuesday is expected to be a spot start for Wilson.

Keith Jenkins can be reached at https://twitter.com/MrKeithJenkins