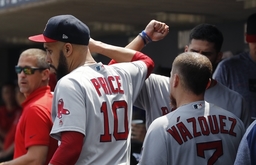 DETROIT (AP) David Price sent the Boston Red Sox sailing into the All-Star break with a bit of history Sunday.

Price pitched one-run ball over five innings and the Red Sox finished off a three-game sweep of Detroit with a 6-3 win. The victory was the 150th of Price's career.

"It will be cool to see that on the back of my baseball card, because it speaks for itself," he said. "That's winning 15 games a year for 10 seasons and I'm definitely proud of it."

The win gives Boston four straight victories and 15 wins in 22 games. The first two games of the series finished after midnight because of lengthy rain delays, but the series finale was played under bright sunshine.

"We had a tough finish, going from London to Toronto and then coming here with two long nights because of rain delays," Red Sox manager Alex Cora said. "To be able to grind out these wins and go into the break like this is great."

Christian Vazquez and Xander Bogaerts each drove in two runs.

"We're getting close," Vazquez said. "We have a couple of things to adjust and if we do that, we're going to be at the top."

"This is a much-needed break for us," said Brandon Dixon, who homered for Detroit. "We can go home, forget about baseball for a few days and come back refreshed."

The Tigers return from the break with a seven-game road trip, which might be the best news of all. Detroit has gone 3-25 in its last 28 home games and hasn't won a series at Comerica since early May.

"I've never been through anything like this, at least not at home," Tigers manager Ron Gardenhire said. "Everyone in baseball knows you have to win at home to be any good and we're not coming close to doing that."

"Every five days, we know what we're getting," Cora said. "He makes adjustments - one day he's throwing 94 and the next it is 89-90 with a changeup and precision. That's why he has 150 major-league wins."

Detroit played the final eight innings without designated hitter Miguel Cabrera, who was ejected for arguing a called third strike.

"They told me he was waving his arms around in the dugout, so they threw him out," Gardenhire said. "I told them he always does that - most of the time I have no idea who he is even talking to."

Heath Hembree, the fifth Boston pitcher, pitched the ninth for his second career save.

Tigers opener Gregory Soto (0-3) took the loss. He gave up two runs and three hits in two innings, raising his ERA to 8.14.

After falling behind 6-1 and 7-0 in the first two games of the series, the Tigers jumped out to an early lead. Victor Reyes drew a walk to start the first and scored on Nicholas Castellanos's double.

The lead didn't last long, as Vazquez hit a two-run homer with one out in the second.

Bogaerts added a two-run double off Nick Ramirez in the fourth, and Andrew Benintendi made it 5-1 with an RBI single later in the inning.

J.D. Martinez gave Boston a five-run lead in the eighth, scoring on a wild pitch. Martinez had two hits.

The Tigers designated reliever Austin Adams for assignment and will announce a corresponding roster move after the break. Adams had a 5.14 ERA in 13 games as a long reliever after being signed off waivers from Minnesota.

Price is only the ninth pitcher since 1920 to have 150 wins with a winning percentage of .650 and an ERA under 3.30. The others are Sandy Koufax, Roger Clemens, Pedro Martinez, Whitey Ford, Lefty Grove, Ron Guidry, Clayton Kershaw and Price's former teammate in Detroit, Max Scherzer.

REVENGE OF THE 2014 TIGERS ROTATION

The Tigers made their last postseason appearance in 2014, finishing a game ahead of the Royals to win their fourth straight AL Central title before being swept by Baltimore in the ALDS. On Sunday, Price became the fifth starter from that team to beat the 2019 Tigers at Comerica Park and the second in 24 hours. Rick Porcello was the winner in Friday's series opener, while Scherzer, Justin Verlander and Anibal Sanchez won in Detroit earlier in the season.

Both teams are off until Friday for the All-Star break. The Red Sox resume play with a home series against the Los Angeles Dodgers, while the Tigers are on the road to play the Kansas City Royals.