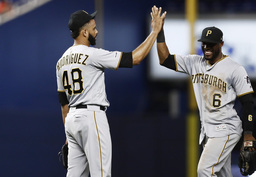 Fortunately for the Pittsburgh Pirates, he stayed in the game.

Brault scattered eight hits over six innings, and the Pirates stopped a seven-game slide by routing the Miami Marlins 11-0 on Friday night.

Brault (3-1) was hit on his left leg by Starlin Castro's line drive in the first, but it didn't seem to affect him very much.

"That was not ideal, that's not what we're looking for, right in the shin," Brault said. "When they came out we had a little laugh over it and I said, `I'm OK.' You don't feel it at first and when you stand up, `Oh yeah, that doesn't feel great.' I'm OK, it's just a bruise."

The left-hander struck out six and walked none. He also went 2 for 2 at the plate.

Colin Moran drove in a career-high five runs with two singles and a homer and Bryan Reynolds had a career-best four hits for the Pirates, who got their first win since June 6 against Atlanta. They finished with 18 hits, matching a season high.

The Pirates broke it open with a four-run fifth off Trevor Richards. Josh Bell tripled in Reynolds and scored on Moran's base hit.

Moran's three-run shot in the seventh increased Pittsburgh's lead to 8-0. The former Marlins No. 1 draft pick drove Jeff Bigham's fastball over the wall in left-center for his 10th homer.

"We have a lot of guys that can get on base," Moran said. "When I'm in the five-hole guys are in scoring position and it's a chance to drive in runs.

"We needed it. We came out and had a really good game to get it rolling now."

Jose Osuna connected for his second pinch-hit homer of the season in the eighth, a two-run drive off Jarlin Garcia.

Three relievers pitched the final three innings for the Pirates.

Richards (3-7) allowed five runs and 11 hits in five innings. In his previous four starts, Richards limited opposing hitters to a .160 average in 24 2/3 innings.

"I wasn't consistent with the fastball today," Richards said. "They got me early in the count. It happens. I just have to do the adjustment and come back better the next time."

Moran's single to center drove in Starling Marte from second to give the Pirates a 1-0 lead in the fourth. Marte reached on an infield single and advanced to second on Richards' throwing error.

Brault escaped from a bases-loaded situation in the third when he struck out Jorge Alfaro.

"We had enough guys out there, enough traffic to put some multiple runs and get back in the game," Miami manager Don Mattingly said.

The Marlins placed veteran infielder Martin Prado on the 10-day injured list with a right hamstring strain. Infielder Yadiel Rivera was promoted from Triple-A New Orleans and went 1 for 4.

Marlins: RHP Jose Urena (herniated disk) was placed on the 60-day injured list. The team's opening-day starter the past two seasons, Urena missed his scheduled start Wednesday, but the severity of the injury was not disclosed until Friday.

Pirates: After seven seasons in the minor leagues, right-hander Dario Agrazal will be promoted from Triple-A Indianapolis on Saturday and start the second game of the series. Agrazal, 24, is not on the 40-man roster after the Pirates designated him for assignment in January. He cleared waivers and the Pirates outrighted him to Indianapolis, where he is 4-2 with a 3.10 ERA in 49 1/3 innings.

Marlins: Pablo Lopez (4-5, 4.26 ERA) will make his first career start against the Pirates. Lopez has completed six innings in each of his past three starts, allowing a combined two runs and 11 hits.