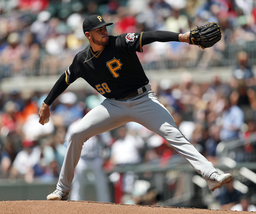 ATLANTA (AP) One year after he was left off Atlanta's postseason rotation, Julio Teheran has re-emerged as a reliable leader on a young staff.

Teheran's roll of superb starts is a big reason the Braves are back in first place in the NL East.

Josh Donaldson drove in the tie-breaking run in Atlanta's five-run fifth inning to win his rematch with Joe Musgrove, Teheran allowed only one earned run and the Braves beat the Pittsburgh Pirates 6-5 on Thursday to complete a four-game sweep.

The Braves have won seven straight to move into the division lead, 1 1/2 games ahead of idle Philadelphia. The Phillies and Braves open a three-game series on Friday night.

Teheran (5-4) opened the game with two walks and needed 27 pitches to survive the first inning. He recovered, lasting six innings while giving up only three hits. He has allowed no more than one earned run in his last eight starts.

"It was very evident to me that he was on a mission," Snitker said.

"That's the way I want to pitch," Teheran said. "Last year, it doesn't mean I was bad, but it was up and down."

Luke Jackson gave up Starling Marte's run-scoring single in the ninth before recovering for his 10th save in 15 chances.

The Pirates have lost seven straight after failing to hold an early 2-1 lead in this one.

Musgrove (4-7) struck out Donaldson in the first inning. It was their first meeting since Musgrove hit Donaldson with a pitch on Monday night, igniting a confrontation that led to both players' ejections. The short outing gave Musgrove the rare opportunity of making two starts in the same series.

"I was ready to go out and attack him like I normally would," Musgrove said. "I put that behind me. I can't go out there with that stuff lingering in the back of my mind or try to prove a point with him."

Musgrove hit Dansby Swanson with a first-inning pitch, but there was no sign of leftover bad feelings from the skirmish three days earlier.

Freddie Freeman's triple to the right-field corner in the fifth drove in Swanson to tie the game. Donaldson, who is appealing his one-game suspension for his role in the confrontation, hit a single to right to drive in Freeman.

Ozzie Albies added a two-run double to center field in the big inning.

The Braves' poor outfield defense helped Pittsburgh take the lead in the fourth. Left fielder Matt Joyce lost Colin Moran's fly ball in the sun, missing his late lunge for the ball as Moran moved to second on the error. Moran scored when Elias Diaz doubled past a diving Ronald Acuna Jr. in center field.

Musgrove faced five batters in the fifth without recording an out. He allowed six runs on nine hits and two walks.

Braves: OF Austin Riley did not start but was used as a pinch-hitter after he was hit by a pitch on his left hand and wrist on Wednesday night. Riley's pinch-hit groundout ended the seventh.

Manager Clint Hurdle says his players haven't quit. After trailing 6-2, Pittsburgh scored the last three runs of the game. "We had the go-ahead run at the plate," Hurdle said, referring to the ninth-inning opportunity. "I love the fight."

Snitker was ejected by home plate umpire Tripp Gibson after Gibson's called strike three on Acuna ended the fourth inning with runners on first and second. Snitker's objection to the high strike call led to his second ejection this season and 11th of his career.

Braves: LHP Max Fried (7-3, 3.75) will face Philadelphia RHP Nick Pivetta (4-2, 4.93) in the opening game of a weekend series between the NL East leaders on Friday night.