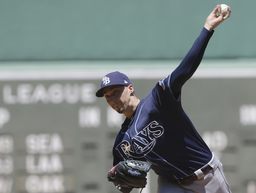 BOSTON (AP) Brandon Lowe hardly looks like he has the build of someone that hit two balls as deep as he did in Fenway Park.

He even surprised his own team.

Lowe hit a pair of solo homers into the center-field bleachers that totaled 890 feet, Blake Snell baffled Boston's lineup and the Tampa Bay Rays beat the Boston Red Sox 6-1 Sunday to take three of four from the World Series champions.

There was actually only a slight breeze blowing in at game time.

Guillermo Heredia and Yandy Diaz also hit solo shots, and Lowe added an RBI single for Tampa Bay, which at 40-24 matched its season-high at 16 games over .500. Diaz had four hits.

Lowe homered on Eduardo Rodriguez's first pitch of the sixth. Diaz led off the seventh with a drive into the Monster seats and Lowe connected off Marcus Walden later in the inning for his 13th home run this season.

"Where he hit those two balls, not many guys hit them," Rays manager Kevin Cash said. "Watching some of the Red Sox players from some past years, they don't hit it up there often. He hit it to the deepest part of the ballpark, and they were both no-doubters."

Snell (4-5) became the third Rays starter to hold Boston to two runs or fewer in the series after Yonny Chirinos and Ryan Yarbrough.

"They're a good team," Boston manager Alex Cora said. "They can pitch, they can play defense. I've been saying it all along, it's a complete team."

Snell battled through two tough opening innings, allowing one run and five hits over six innings with seven strikeouts. With runners on second and third in the first, the AL Cy Young Award winner stuck out the next three batters swinging with sharp, breaking curveballs.

"These guys have a track record of being good pitching-wise and they came here and did what they normally do," Boston shortstop Xander Bogaerts said.

Rodriguez (6-4) gave up four runs and seven hits in 5 2/3 innings with seven strikeouts.

Heredia homered into the Green Monster seats in the second.

Boston got the first two runners on in the opening two innings but scored just a run on Marco Hernandez's RBI single in the second.

After Lowe's second, some fans tried to change the mood in Fenway, chanting "We Want the Cup!" ahead of the Bruins' Game 6 against St. Louis in the Stanley Cup Final on Sunday night. They broke into "Let's Go Bruins!" cheers later.

Tampa Bay reached 40 wins in its initial 64 games for only the second time in its history after doing it in 62 games in 2010.

Rays: OF Tommy Pham returned to the lineup after leaving Saturday's first game of the DH when he was hit by a pitch on the right wrist.

Red Sox: Slugger J.D. Martinez missed his fourth straight game with back tightness. Cora said that he was "feeling better, but he's not ready to play." . Cora also said RHP Nathan Eovaldi had "a little bicep soreness" and was going to back off as he continues rehab from surgery to remove loose body in his right elbow in late April. ... 3B Rafael Devers and LF Andrew Benintendi both had the day off.

Rays: RHP Charlie Morton (7-0, 2.30 ERA) brings the longest active unbeaten streak in the majors at 20 starts into Monday's series opener at home against Oakland. He is 10-0 since last August.

Red Sox: LHP Chris Sale (2-7, 3.84) looks to build off his strong start the last time out Monday against Texas. He had a complete-game victory over Kansas City Wednesday and recorded his second immaculate inning of the season, joining Lefty Grove (1928) as the only to do it twice in a year.