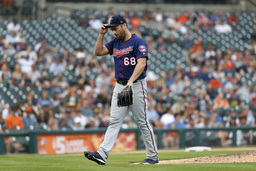 DETROIT (AP) The Detroit Tigers haven't given their fans much to cheer about at home this season.

Playing in front of 26,818 fans - their biggest crowd since opening day - the Tigers routed the Minnesota Twins 9-3 Saturday for a rare home win.

"I'll take exactly that again tomorrow," Tigers manager Ron Gardenhire said. "Bring all those fans back and let's give them another performance like that."

The Tigers had lost three straight and 13 of 14 at home, including a winless nine-game homestand May 13-23.

"We feed off our fans, so today was a lot of fun," Tigers opener Buck Farmer said. "It has been a tough year, and we haven't given our fans much entertainment."

JaCoby Jones, always a crowd favorite with his high-speed baserunning and defense, continued his hot streak at the plate with two homers and a career-high five RBIs.

"That young man has worked incredibly hard to adjust his swing and find a way to be quicker to the ball," Gardenhire said. "There are times when guys never find a solution, and we know he's going to still have struggles ahead, but we're going to ride this as long as we can.

"I hope we reminded our fans that we can still be a pretty good baseball team," he said.

Nick Ramirez (2-0), Detroit's second pitcher in a bullpen game, gave up one run and three hits with three walks in three innings.

Minnesota dropped to 5-4 on a 10-game road trip that ends Sunday.

"It was kind of an off afternoon for us," Twins manager Rocco Baldelli said. "We really didn't get much going on either side of the ball."

"I felt like it was an OK day, but my mistakes really hurt us," he said.

The Twins took a quick 1-0 lead in the first. Max Kepler started the game with a walk and Jorge Polanco followed with an RBI double off Farmer.

Jones put the Tigers ahead with a three-run homer in the second.

"That was one of the few bad sliders I threw all day, but it was at the wrong time and wrong location to JaCoby," Gibson said.

Minnesota pulled to 3-2 against Ramirez in the third. Kepler walked again to start the inning, took second on Nelson Cruz's single and scored on C.J. Cron's base hit.

Stewart led off the bottom of the third with his fifth homer, and Harold Castro gave the Tigers a three-run lead with an RBI single in the fifth.

Cruz hit his 10th homer on Blaine Hardy's first pitch of the eighth inning. He has 19 regular-season homers against the Tigers to go along with the eight he has hit in nine postseason games against Detroit.

"We gave Blaine the eighth and he went out there and challenged Cruz," Gardenhire said. "He hit it 8,000 feet, but things went better after that."

Jones hit a two-run homer to make it 7-3 in the bottom of the eighth and the Tigers added two more runs in the inning.

RHP Ryan Eades, called up from Triple-A Rochester before the game, made his debut by replacing Gibson for the sixth inning. He became the first player in major league history to wear No. 80 in a regular-season game.

"It was great to see him out there, but more importantly, he threw the ball very well," Baldelli said. "Your job is to go out there and get outs and he did that."

After the game, the Tigers optioned RHP Zac Reininger to Triple-A Toledo and called up RHP Carlos Torres. Torres, signed on a minor-league deal on May 26, had a 6.52 ERA in 10 relief appearances last year for the Washington Nationals.

Along with reliever Trevor May, Gibson and Polanco are the only players on the Twins roster who played for Gardenhire in 2014, his last season as Minnesota's manager.

Gardenhire was pleased by his team's performance against Gibson, who became a rotation regular that season.

"I've known him a long time, and the only way to have any success against him is to make him work," he said. "We did that by staying in the zone instead of chasing as many pitches as we have lately."

The teams finish their three-game series on Sunday with Minnesota's Jake Odorizzi (8-2, 1.96) facing Detroit's Ryan Carpenter (1-2, 6.23). Odorizzi comes into the game on a 16 1/3-inning scoreless streak.