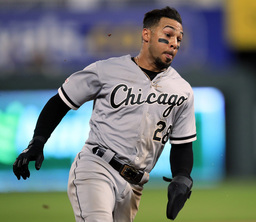 A night after failing multiple times with runners in scoring position, Whit Merrifield and Adalberto Mondesi had clutch hits to help the Kansas City Royals stop a six-game slide with a 6-4 victory over the Chicago White Sox on Friday night.

Mondesi's third hit, an RBI single with two out in the seventh, scored Merrifield to make it 5-4. Mondesi had hits in three straight at-bats to end a 0-for-11 skid. He also scored on Jorge Soler's RBI double to make it 6-4.

After Homer Bailey pitched six-plus innings of three-run ball, Brad Boxberger (1-3) allowed a run in the seventh but still got his first victory in 26 appearances. Ian Kennedy pitched the ninth for his fourth save in six chances.

"He was keeping the ball down," manager Rick Renteria said. "At the end of the day, once he got into that sixth, they're able to tie the game."

James McCann put Chicago up 2-0 with a two-run double in the third, but Kansas City got one back in the bottom half on Merrifield's RBI single.

Merrifield sparked a three-run sixth with a leadoff infield single. Alex Gordon singled against the shift and Mondesi tied it with a double to right. Nova then walked Ryan O'Hearn, snapping a streak of four straight strikeouts for O'Hearn, and the right-hander was done.

Cheslor Cuthbert ripped a single into right, scoring Gordon and Mondesi to give Kansas City a 4-2 lead. He has hit safely in all seven games since being called up May 31.

Tim Anderson chased Bailey with a leadoff double in the seventh and later scored on a fielder's choice, and Yoan Moncada added an RBI double to tie it at 4.

White Sox: OF Jon Jay was transferred to Triple-A Charlotte for his rehab assignment. He has been on the injured list with a right hip strain since spring training. He played three games with Double-A Birmingham and went 2 for 10.

Royals: 3B Hunter Dozier is making progress in his recovery from strained oblique. He is getting closer to introducing some baseball activity. He's eligible to come off the IL for Tuesday's game against Detroit but said he probably won't be ready for that. ... LHP Danny Duffy, who was hit by a line drive in Thursday's start against Boston, said before Friday's game that he is sore but doesn't think he'll miss a start.