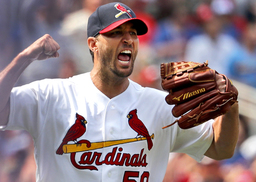 By BY STEVE OVERBEY

The St. Louis right-hander got it from first baseman Paul Goldschmidt right after the first inning of the Cardinals' 2-1 win over the Chicago Cubs on Sunday.

The 37-year-old Wainwright overcame a career-high seven walks to pitch eight shutout innings, leading his team to a three-game sweep of its NL Central rival.

Wainwright walked two of the game's first three batters before wriggling out of the jam by getting Javier Baez to ground into an inning-ending double play, one of three for the Cardinals.

Still not sure of the quality of his pitches, Wainwright leaned on Goldschmidt for advice.

"He came over to me and said your stuff is great, trust it," Wainwright said. "Believe in it."

The Cardinals got just four hits in their fourth straight win.

Chicago was limited to three hits, and lost for the sixth time in seven games.

Wainwright (5-5) didn't allow a hit until Kris Bryant singled with one out in the sixth. He gave up two hits and struck out eight while throwing 126 pitches.

"I'm still about two inches off from being exactly where I need to be on a lot of those pitches," Wainwright said. "I've just got to continue to reset my sights, knowing my stuff is good enough to get guys out."

"He looked right at me and said, "I've got plenty of gas left,'" Shildt said.

"He was efficient, a pitch-maker."

"It's his game. I was just back there trying to catch, steal a couple strikes and mainly try to stay on the same page," Knizner said.

Knizner caught Wainwright a couple times last season during his rehab stints on the Double-A and Triple-A levels.

Chicago starter Cole Hamels (4-2) gave up one unearned run on two hits over seven innings. He struck out four and walked two.

"Wainwright definitely had it going," Hamels said. "When that's the case you just put up zeros trying to match him - and see what happens in the end."

The Cubs, who swept a three-game series from the Cardinals at Wrigley Field in early May, put runners at the corners with one out in the ninth against Jordan Hicks.

John Gant relieved, retired Addison Russell on an RBI grounder and got David Bote to ground out for his third save in four chances.

The Cardinals took a 1-0 lead when Jedd Gyorko walked with one out in the fifth, stole second and went to third on an errant throw by catcher Willson Contreras. Kolten Wong, who had two hits, had a sacrifice fly.

Wong, playing second base, made a nice, over-the-shoulder catch of Anthony Rizzo's looper with two on to end the eighth.

St. Louis RHP Alex Reyes, who suffered a broken finger on April 25, started on Sunday for Triple-A Memphis. Reyes could possibly join the starting rotation as early as next weekend against the Cubs, according to Shildt. He coming off a pair of solid rehab performances for Class A Palm Beach.

Cardinals: LHP Genesis Cabrera (0-1, 7.36) will face RHP Luis Castillo (5-1, 2.45) in the first of a three-game set against Cincinnati on Tuesday. Cabrera gave up three earned runs on five hits over 3 2/3 innings in his major league debut on Wednesday.