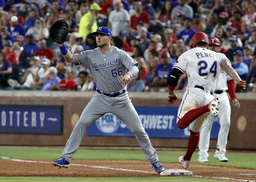 ARLINGTON, Texas (AP) Joey Gallo stood in center field trying not to beat himself up after misplaying two fly balls into triples as he and the Texas Rangers trailed the Kansas City Royals by two runs going into the sixth inning.

Soon enough, Gallo took out his frustrations on the baseball.

Gallo's home run, his team-leading 16th of the season, sailed 457 feet and landed in the second seating area beyond the center-field wall.

"Things turned around quick," Gallo said. In his first season playing regularly in center, he also redeemed himself defensively by finishing the game with a diving catch in left-center on a ball hit by Billy Hamilton.

Ariel Jurado (2-2) won for the first time in three major league starts this season. Jurado allowed two runs on five hits and three walks. The second-year right-hander, who was recalled from Triple-A Nashville on April 26, had career highs in strikeouts (six) and pitches (101).

All of that on a night when his parents, Ariel Sr. and Yizel, had traveled from Panama to see him pitch in the majors for the first time.

"That was something special," Jurado said through an interpreter.

"I'm saying a little prayer `cause the baseball gods should be with us on this one," Woodward said. "Like, I was hoping for three (runs)."

Duffy (3-2) lost for the first time since April 26, his first start of the season after recovering from last year's shoulder injury. Carrying a two-hit shutout into the sixth inning, he allowed all six runs, six hits and two walks - both in the sixth.

"This game will rip your heart out sometimes," Duffy said. "But I've got to turn the page after tonight and go back out there, try to be better next time."

Texas loaded the bases in the sixth inning on outfield singles by Shin-Soo Choo and Elvis Andrus and a chopper hit between third base and the mound by Hunter Pence. Duffy fielded Pence's grounder, but his throw to first base was late.

Duffy walked Nomar Mazara with the bases loaded to tie the score 2-2. Gallo then launched a 1-1 fastball to end a six-game homerless streak, which matched his longest this season.

Cheslor Cuthbert homered in his first major league at-bat of the season, and Alex Gordon tripled-in Kansas City's other run. Cuthbert, who earlier Friday had his contract selected from Triple-A Omaha, hit an opposite-field homer that just cleared the right-field wall in the second and also made a standout play at third base.

"He's always been a really good defender at third base for us," Royals manager Ned Yost said of Cuthbert. "That's kind of expected."

Gordon's triple in the fifth inning turned around Gallo and struck about midway up the wall in straightaway center, scoring Adalberto Mondesi. In the third inning, Gallo broke in on a fly ball hit by Whit Merrifield that went over his head for a triple.

All of that was forgotten in the bottom of the sixth.

Jesse Chavez, the first of three Texas relievers, worked a 1-2-3 seventh inning. He ran his scoreless streak to 17 1/3 innings in May, a franchise record for one month. ... The Royals lead the majors with 24 triples. ... Mondesi had his major league-leading 19th stolen base to give the Royals a major league-leading 53.

To make room for Cuthbert, the Royals designated INF-OF Chris Owings for assignment. The Rangers selected the contract of RHP David Carpenter from Nashville and optioned OF Zack Granite to Nashville.

Royals: OF Hunter Dozier (right thorax tightness) is day to day, leaving Thursday's game in the fifth inning and sitting out Friday.

Royals: RHP Homer Bailey (4-5, 5.79), having joined the Royals this winter following 12 seasons with the Cincinnati Reds, will make his Globe Life Park debut on Saturday.