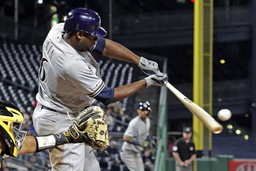 PITTSBURGH (AP) Mike Moustakas doesn't have a secret behind his power resurgence this season.

The veteran third baseman now has 15 homers in 51 games, up from eight in 54 games with Milwaukee last season after being acquired from Kansas City on July 27.

"I've honestly just been getting good pitches to hit and not missing them," he said. "I'm just trying to not do too much. Take the same approach, same swing. Just get a good pitch to hit, get a good swing on it and see what happens."

Yasmani Grandal also homered and had four hits to help the Brewers win for the third time in four games.

Moustakas hit a two-run shot over the right-center field wall off Joe Musgrove in the first inning to get the Brewers on the scoreboard. His solo shot to right in the third extended Milwaukee's lead to 4-1, and gave Moustakas his 10th career multihomer game.

Grandal followed Moustakas' second homer with a solo shot off the left-field foul pole to back Chase Anderson (3-0), who gave up two runs and six hits with five strikeouts in five innings.

"It was a very good night offensively, for sure," Brewers manager Craig Counsell said. "We did a good job all around. A nice night by the offense and a good start from (Anderson)."

Colin Moran homered in the fourth to pull Pittsburgh to 5-2, before Moustakas - 1 for 11 in his previous three games - added an RBI single in the eighth that made it 7-2.

Musgrove (3-6) allowed five runs and 11 hits in six innings. After giving up two home runs in his first 11 starts this season, Musgrove surrendered three in the first three innings Thursday.

"I had a good game plan," Musgrove said. "You saw when I executed the pitches, I got the results that we needed. I think it just comes down to execution."

The Pirates scored three runs in the bottom of the eighth to pull within two and the Brewers pulled away again with four in the ninth - including Lorenzo Cain's three-run double.

"The game seemed like we were so far away, but we weren't," Pirates manager Clint Hurdle said. "We were knocking on the door until late."

Josh Bell pushed his hitting streak to 10 games by legging out a double on a ball that dropped into shallow left to lead off the second. He scored on a single from Elias Diaz, cutting Milwaukee's lead to 3-1 after Christian Yelich's RBI triple in the top of the inning.

Brewers: INF Travis Shaw is expected to return next week after remaining with Triple-A San Antonio through the weekend, Counsell said. Shaw has not played with Milwaukee since injuring his right wrist May 13.

Pirates: RHP Jordan Lyles threw a bullpen session before the game Thursday after leaving his last start with left hamstring discomfort Tuesday. Lyles will start Sunday if he got through his session fine.

Brewers: RHP Jhoulys Chacin (3-6, 4.88) will take the mound for the second game of the four-game set on Friday. He's lost his past three starts after giving up four runs in five innings in a 7-2 loss to Philadelphia on Saturday.

Pirates: RHP Chris Archer (1-5, 5.75) will try for his first win since April 7 on Friday. He allowed four runs and six hits in five innings during his last outing, an 11-7 loss to the Dodgers on Sunday.