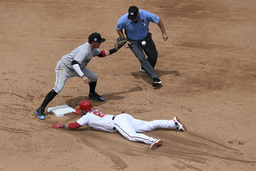 WASHINGTON (AP) This time, the Nationals beleaguered bullpen wasn't alone in blowing yet another lead.

After Scherzer went six innings and left leading 2-1, Tanner Rainey allowed the tying run in the seventh for the Nationals' 11th blown save, matching the Chicago Cubs for most in the majors.

The bullpen blues weren't helped by shoddy defense. First baseman Matt Adams dropped Urena's bunt in the seventh trying to apply a tag, and shortstop Trea Turner sailed a ball over Adams in the eighth.

The Nationals loaded the bases in the bottom of the inning but could not push the tying run across against the relief duo of Nick Anderson and Adam Conley.

Sergio Romo pitched a scoreless ninth inning for his 10th save, dropping Washington to 22-32.

The Nationals fell to 2-10 in games started by Scherzer, who allowed seven hits and struck out six. He logged six scoreless innings in his previous start against the Mets, but New York rallied against Barraclough and closer Sean Doolittle for a 6-1 victory.

"I was able to pound the zone and throw a ton of strikes," said Scherzer, who also had the go-ahead RBI on Sunday, hitting an RBI single for a 2-1 lead in the fifth inning.

"They did a great job of grinding me and just fouling balls off to run the pitch count up. They just made me work."

The Marlins (16-35) finished 4-3 on their seven-game trip through Detroit and Washington. They swept the Tigers before salvaging one out of four in the nation's capital.

"Jose was good all day, and we were able to scratch some runs in there," Marlins manager Don Mattingly said. "It wasn't easy, but we got enough to get it done."

Conley has not allowed a run in his last five appearances. He came on with two outs in the eighth to face Juan Soto, the Nationals' hottest hitter, and got him to fly out to left and end the threat.

Neil Walker had three hits, including an RBI single in the third to stake Urena to an early lead.

Urena (3-6) allowed two earned runs and four hits to improve to 5-2 against the Nationals, including an earlier win this season.

"It's a random thing. It happens," he said of his success against Washington. "They are a pretty good team. That is the game sometimes. With those hitters, you have to be aggressive because they are aggressive, too."

OF Harold Ramirez singled in his first at-bat and has reached safely in 11 of 12 games since making his major league debut on May 11.

Soto extended his hitting streak to a career-high 11 games with a double to right in the fourth. He is 19 for 41 with 11 RBIs during that span.

Marlins: OF Garrett Cooper was back in the lineup after getting a day off Sunday. He went 2 for 5 with a double in the third inning.

Nationals: OF Victor Robles was given the day off to rest.