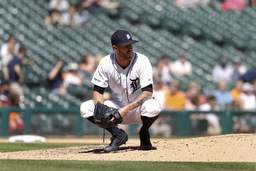 In grand fashion, too.

Cooper hit a grand slam with two outs in the ninth inning and the Miami Marlins won their sixth in a row, rallying past Detroit 5-2 Thursday to finish a terrible homestand for the Tigers.

Cooper jumped up and down up the first base line as his ball sailed into the left field seats.

"Probably one of the better feelings, I think I pimped it a little bit," Cooper said. "As soon as I got it off the bat, I knew I got it pretty good."

The Marlins, who had the worst record in the majors last week, extended the longest active winning streak in the big leagues.

The Tigers wrapped up an 0-9 stay at Comerica Park against Houston, Oakland and the Marlins. That record doesn't include a suspended game in which Detroit trails Oakland in the late innings.

Cooper homered off Shane Greene (0-2), who had been 15 for 15 on save chances this season.

"I just got to pitch better," Greene said. "It's my job to close the door there and I couldn't do it."

Instead, Cooper homered on an 0-1 pitch.

The mistakes were made by third baseman Dawel Lugo and second baseman Ronny Rodriguez, who made their debuts last season and have 124 big league games between them.

It was 2-0 when Harold Ramirez opened the inning with a grounder that Lugo misplayed for an error. Ramirez scored on Neil Walker's single.

Greene later induced a double-play ball to Rodriguez that would've ended the game. But Rodriguez bobbled it and Miguel Rojas was called safe at first, which was held up on replay.

"The only person I'm pointing the finger at today is myself," Greene said. "I just got to make a pitch and pick up the team there and I couldn't do it."

On Wednesday, Cooper hit a home run in the sixth inning to spark a 6-3 comeback win in his 39th career game.

"It's been an up-and-down roller coaster this past year and a half," he said. "Just to play every day, that's what I've been doing my whole life and doing in the minor leagues."

"The club is gaining a little confidence, but it goes back to our starting pitching giving us a chance," Marlins manager Don Mattingly said.

Tyler Kinley (1-0) gave up one run in the eighth and got the win. Sergio Romo earned his ninth save with a perfect ninth.

Cabrera had an RBI single in the eighth. It was his second hit of the game and moved Cabrera into 60th place on baseball's career hit list with 2,727, one more than Chipper Jones.

With the bases loaded in the sixth inning, Rodriguez hit a flyball to left field. Austin Dean made a sliding catch on the sacrifice fly for a 1-0 lead.

Cabrera went into the game tied with Carlos Beltran for 61st on the hits list.

After beating the Chicago Cubs 6-5 on May 6, the Marlins dropped three straight at Wrigley Field to open a seven-game losing streak, which included two-game sweeps against the New York Mets and Tampa Bay. Then, Miami swept the Mets and Tigers, taking three in Detroit by a combined six runs.

"Just as bad as it looks one day, it looks great six days later," Mattingly said. "Stay humble, keep working and just try to ride this as long as we can."