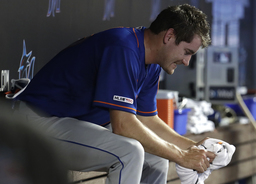 MIAMI (AP) The New York Mets aren't hitting, and another lapse by slugger Robinson Cano raised questions about how hard they're trying.

None of which helps the shaky job security of manager Mickey Callaway.

Sandy Alcantara needed just 89 pitches to throw a two-hitter in a duel with Noah Syndergaard , and the lowly Miami Marlins beat the reeling Mets 3-0 Sunday to complete a three-game sweep.

A day after being shut out on one hit, the Mets dropped their fifth in row. And for the second time in three games, Cano failed to run hard after hitting a groundball.

The latest unsightly defeat against a team with the worst record in the majors is sure to intensify speculation about Callaway's status as the team returns to New York. The Mets (20-25) have their longest losing streak of the year and are a season-worst five games under .500.

"I understand that everybody is disappointed - the fans, the ownership, myself, the team - because this is not who we are," Callaway said.

Callaway again found himself defending Cano, who failed to run when he hit a grounder that bounced off the dirt behind home plate and rolled a few feet fair. Cano stood at the plate questioning the call while the Marlins completed a 2-6-3 double play.

"I saw the ball hit and it didn't even hit the plate, it hit behind the plate," Cano said. "I thought it was a foul ball."

On Friday, Cano jogged to first when he grounded into an inning-ending 1-6-3 double play, and later told Callaway he thought there were two out.

"Things are piling up on Robbie right now," Callaway said when asked about Cano's latest bad look. "Come one, let's face it - the ball lands foul and spins into fair territory. He saw it hit foul, and by the time he looked back up the ball had spun into fair territory and the play was over. Stuff happens like that when things are going bad."

Syndergaard (3-4) allowed two runs in seven innings, and afterward defended Callaway, who is in his second year as manager.

"I respect the hell out of Mickey," Syndergaard said. "It's kind of bull what's going on right now with the speculation that there could be a change, because we're still early in the season and just one small step from putting this all together. It's certainly not on him."

Part of the Mets' problem was Alcantara (2-4), who struck out eight, walked one and retired the last six batters for the Marlins' first complete game shutout since Edinson Volquez tossed a no-hitter against Arizona in June 2017. It was the first complete game for Alcantara, a 23-year-old righty acquired from St. Louis in a trade for Marcell Ozuna before last season.

"I felt great," Alcantara said. "I felt like a superstar about my complete game."

He also had a bunt single to set up the first run, and made a nifty behind-the-back grab of J.D. Davis' one-hopper in the first inning.

The Marlins (13-31), who came into the series with a seven-game losing streak, have their first three-game winning streak of the season. Their bandwagon is growing - the crowd of 15,983 was the biggest at Marlins Park since opening day.

Miami became the first team to hold its opponent to three hits or less in consecutive shutouts since Philadelphia limited Atlanta to three hits on Sept. 1-2, 2014.

The Marlins won with six hits. Curtis Granderson hit his fifth homer for their final run in the eighth.

Alcantara has made five of his 15 career starts against the Mets, and has an ERA of 2.14 with a 2-2 record.

The game took 1:59 to play. The first 19 batters went down in order, and the first three innings took only 31 minutes.

Marlins: C Jorge Alfaro (left calf strain) might return to the lineup Tuesday. ... INF-OF Jon Berti (strained left oblique) was scratched from the lineup and is day to day.

Mets: They begin a four-game series against Washington at home Monday with the starting pitcher to be announced.

Marlins: Following an off day, LHP Caleb Smith (3-1, 2.25) is scheduled to start Tuesday when Miami begins a seven-game trip in Detroit. Opponents are batting .180 against him, which ranks second among National League starters.