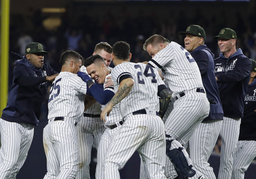 NEW YORK (AP) CC Sabathia shouted salty insults at the Tampa Bay Rays and said he tried to hit one of their batters.

A little while later, it was Gio Urshela who had the last word for the New York Yankees.

Urshela's RBI single capped a three-run rally in the bottom of the ninth inning, and the surging Yankees leapfrogged Tampa Bay into first place in the AL East with a rousing 4-3 victory Friday night.

"When Gio came up, I said: `Turn off the lights,'" Sabathia recalled.

"The kid's just been unbelievable and every time there's a big situation, he always comes through," teammate Luke Voit said.

"He's been the energy of this team so far," Sabathia said.

Voit homered on the first pitch from Jose Alvarado (0-3) to make it 3-2. New York tied it when pinch-runner Thairo Estrada scored on a bases-loaded wild pitch by Alvarado, who entered with a 1.04 ERA.

Urshela and Voit had three hits apiece. Kendrys Morales clubbed an early solo shot for his first home run since joining the Yankees on Wednesday following a trade from Oakland.

Willy Adames homered off Sabathia, who pitched six strong innings , and rookie Brandon Lowe hit a tiebreaking double against Chad Green with two outs in the eighth. Tampa Bay added another run on shortstop Gleyber Torres' throwing error before rain caused a 35-minute delay in the bottom of the inning on "Game of Thrones" night at Yankee Stadium.

Torres doubled on the 10th pitch of his at-bat in the ninth to put runners at second and third with one out.

"There's no excuse for what happened," Alvarado said through a translator. "They must have been sitting on my fastball."

Jonathan Holder (3-1) struck out two in a perfect inning.

With their fourth straight victory and ninth in 11 games, the injury-ravaged Yankees took over the division lead for the first time since falling to 1-1 on March 30.

"Night in and night out, I mean, it gets better and better. It's crazy," Voit said.

Tampa Bay had been alone in first place since the end of games on March 31.

The unfriendly rivals play twice more this weekend after New York took two of three from the Rays last weekend at Tropicana Field.

"Anytime you get walked off, it's tough," Rays manager Kevin Cash said. "We did a lot of things good. We just came up short."

Sabathia threw three inside pitches to Austin Meadows, including one right near the knees, before walking him with two outs and nobody on in the fifth. As he was coming off the field, a camera caught Sabathia telling teammates he "was definitely trying to hit" Meadows.

"I really didn't think anything of it, honestly," Meadows said. "He didn't hit me. So all good there."

After striking out Lowe with his final pitch in the sixth, the big lefty cursed and yelled a nasty phrase in the Rays' direction.

"I don't remember what I said," Sabathia answered. "Just excited about the game. We are playing for first place."

The 38-year-old Sabathia got into heated exchanges with the Rays the previous two times he faced them - once last year, once this season - when he grew angry over pitches that either hit or went behind New York batters.

In his final start last season, Sabathia was ejected at Tropicana Field and handed a five-game suspension for plunking Jesus Sucre after Andrew Kittredge of the Rays threw behind Austin Romine.

"CC's always got a little bit of an edge," Yankees manager Aaron Boone said. "He went out and set the tone really well to start off this series."

Despite the latest verbal antics by Sabathia, who plans to retire after this season, there was no trouble on the field.

"You know CC, he's been around a long time. He's a competitor," Meadows said. "He obviously wanted to take a shot there, but it is what it is, obviously. We've had beef back and forth, so it is part of the game."

Rays: Yandy Diaz was back in the lineup at first base after leaving Wednesday's game in Miami with a sore left ankle. ... Guillermo Heredia (bruised right hand) started in center field. He was hit by a pitch Wednesday, but X-rays were negative. ... C Anthony Bemboom, who sprained his left knee Wednesday, was placed on the 10-day injured list and is expected to miss four to six weeks, Cash said. That opened a 25-man roster spot for catcher Erik Kratz, acquired Thursday from San Francisco. ... RHP Hunter Wood (sore right shoulder) struck out three in one inning of a rehab outing Thursday for Class A Charlotte and is "real close" to returning, Cash said.

Yankees: LHP James Paxton (left knee inflammation) won't come off the injured list in time to start Sunday's series finale, Boone said. He is expected to throw another bullpen in the next few days and could return to the rotation on the upcoming road trip next week.