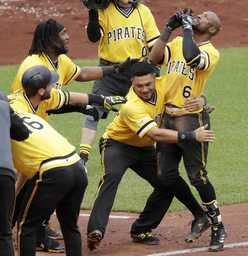 PITTSBURGH (AP) Starling Marte can't pinpoint why. The Pirates center fielder just knows there's something about batting with the game on the line that brings out an extra sense of confidence.

Not even a monthlong slump to start this season is going to shake that.

Marte hit a game-ending, three-run homer in the 13th inning, rallying the Pittsburgh Pirates past Oakland 5-3 Sunday after the Athletics scored twice in the top of the inning.

"Those situations don't happen a lot, but there's something special about them," Marte said through a translator. "What I've recognized is that when it comes up to me, it's something about (those situations) that makes me feel big."

Cole Tucker started Pittsburgh's comeback with a one-out single off Fernando Rodney (0-2). Jung Ho Kang walked and Adam Frazier drove in Tucker with a single before Marte drilled a ball out to center for his fifth walkoff homer.

Marte was batting 3 for 15 in his previous three games with a .200 average on the season, but his late-game heroics resembled years past when he was one of Pittsburgh's most potent hitters.

"More than anything, all I've got to say is that it signified a lot to be able to be that guy," he said. "It brings me back to that place of being that guy that the team can continue to depend on."

A's slugger Khris Davis, last year's major league home run leader, left in the second inning with a left hip bruise after crashing into the left field wall chasing a popup. He said he expects to play against the Reds on Tuesday.

"I was just tracking the ball and kind of checked the fence and knew it was going to be close to the fence," Davis said. "I just kept following the ball and stayed on it. I was happy I made the play, but a little sad I had to pull myself out. I didn't feel like I'd be beneficial for the team."

Tyler Lyons (1-0) got the win despite struggling in his Pirates debut. After pitching a 1-2-3 12th, he walked the first two batters in the 13th and allowed an RBI single to Kendrys Morales and a run-scoring double to Stephen Piscotty before getting pitcher Yusmeiro Petit to hit into an inning-ending double play.

The teams were tied 1-1 going into extras. Pittsburgh got on the board in the second when Josh Bell doubled and scored on Colin Moran's sacrifice fly. A's pinch-hitter Robbie Grossman tied it in the seventh with a single.

The Pirates had a golden opportunity with runners on first and third with zero outs in the sixth but couldn't capitalize as Gregory Polanco flied out, Bell struck out and Melky Cabrera lined out to end the inning.

Pittsburgh starter Jordan Lyles gave up one run and five hits over 6 2/3 innings, looking more like the pitcher that began the season tossing 11 scoreless innings in his first two home starts and less like the one holding a 6.00 ERA over his previous two outings. Lyles faced a jam in the fifth after he walked three consecutive batters with two outs but forced Ramon Laureano to ground into a forceout at second.

"I was in the zone a little bit more," Lyles said. "When I was throwing my curveball, even the bad ones, they were able to put in play. Our defense was in the right spots at the right times."

Athletics: The A's return home for a three-game series against Cincinnati on Tuesday, where Mike Fiers (2-3, 6.81) will take the mound coming off a solid seven-inning outing against Toronto on April 26.

Pirates: Steven Brault will get the start Tuesday against Texas in place of Jameson Taillion, who was ruled out for a month Saturday with an elbow flexor tendon strain. This season, Brault has an 8.31 ERA with 11 strikeouts over 8 2/3 innings of work out of the bullpen.