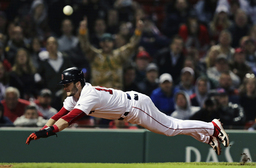 Bogaerts hit a tying two-run double that sailed over the head of Ramon Laureano, who made a bad read during a six-run third inning, and the Boston Red Sox beat the Athletics 9-4 on Monday night.

When Oakland took three of four from the Red Sox earlier in the season, Laureano threw Bogaerts out in consecutive games to secure wins. He also cut down Mookie Betts to preserve a victory.

"I hit (it) good, but right at him," Bogaerts said of his tying double.

Boston also got some other help from the Athletics, who committed two errors in the big inning.

"Fortunately, we had an error there to get it started, a couple of singles and a big double there," Betts said. "Just showed what we can do."

Trailing 4-0, the Red Sox took advantage of two errors to score six unearned runs, getting Bogaerts' double over Laureano, who initially charged in before turning and running to where it bounced. Chavis followed that with a two-run single that made it 6-4.

Betts and J.D. Martinez had RBI singles after second baseman Jurickson Profar bounced a throw to second for the first error and Andrew Benintendi reached when Frankie Montas missed the bag covering first.

"It got stuck in my glove a little bit and then I sped it up. I didn't even grab the ball," Profar said.

"It looked like he just didn't get a great handle on it and then tried to be quick with the throw," he said. "Just kind of obviously threw it low. You've got a chance for a double play and get out of the inning there, and it just got out of hand a little bit."

Ryan Brasier (1-0) got four outs and was credited with the victory after starter Eduardo Rodriguez failed to go five innings with Boston leading. Matt Barnes got the final two outs on two pitches for his second save after the Athletics loaded the bases.

Profar had a two-run single for Oakland, which lost its fourth straight. Montas (4-2) gave up seven runs, one earned, in 4 1/3 innings.

Oakland had taken a 4-0 lead in the second on Profar's two-run single, an RBI single by Josh Phegley and a run-scoring double from Matt Chapman.

Athletics: OF Mark Canha was placed on the 10-day injured list with a sprained right wrist. Melvin said he's scheduled to have an MRI on Tuesday.

Red Sox: Manager Alex Cora said the team was sitting down with 2B Dustin Pedroia (left knee irritation) Monday night to map out a plan for his rehab stint that will likely begin Thursday at Double-A Portland. ... INF Eduardo Nunez (mid-back strain) started a rehab assignment with Triple-A Pawtucket Monday, going 0 for 4. ... Utility INF Brock Holt (scratched right cornea) returned from his rehab assignment because of a new injury, to his right shoulder.

With Canha going on the IL, the Athletics had only two players on the bench - OF Robbie Grossman and C Nick Hundley.

"It makes it a little bit challenging," Melvin said. "We'll play with the nine guys on the field today and have one potential spot to do something different."

Both entered during the seventh inning - Grossman pinch-hit and Hundley went in to catch.

Thirty-three-years ago, Boston's Roger Clemens set a major league record, striking out 20 against Seattle. It was his first of his two 20-strikeout games. The other came 10 years later at Detroit's Tiger Stadium.

Athletics: RHP Aaron Brooks (2-2, 5.33 ERA) is in line to start Tuesday. He went six scoreless innings versus the Red Sox on April 1.

Red Sox: RHP Rick Porcello (1-3, 7.43) got his only win of the season in his previous start, when he gave up three runs in six innings.