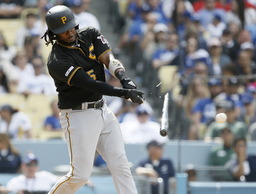 Bellinger hit his 14th home run of the season in the fourth inning, then rolled an RBI single through the defensive shift in the seventh inning as the Dodgers beat the Pittsburgh Pirates 7-6 on Sunday to complete a three-game sweep.

Max Muncy singled home the tying run in the fifth inning and the go-ahead run in the seventh, boosting the Los Angeles Dodgers over the Pittsburgh Pirates 7-6 Sunday for a three-game sweep.

Rich Hill made his season debut after recovering from a sprained right knee and allowed five runs - just one earned - and five hits in six innings. Hill struck out six, walked none and retired his last 13 batters as the Dodgers rallied from a 5-1 deficit.

"I didn't change anything," Hill said. "I just continued to keep executing and making pitches. I have always continuously gotten better as outings have gone on."

Bellinger's 14th homer matched Albert Pujols (2006), Alex Rodriguez (2007) and Christian Yelich (this year) for the most home runs before the end of the season's first full month. Bellinger had three RBIs and leads the major leagues with a .427 average and 36 RBIs.

Los Angeles has won four straight overall and seven in a row at home, improving to an NL-best 19-11. The Pirates have lost eight consecutive games overall and 14 of their last 16 against the Dodgers.

Pittsburgh's Melky Cabrera had four hits, including first multi-homer game since July 2015 and the fifth of his career.

Julio Urias (2-1) allowed one run in two innings, and Kenley Jansen pitched in an out of trouble in the ninth for his 10th save in 11 chances. Adam Frazier walked with two outs and Cabrera doubled, but Gregory Polanco struck out.

A day after getting the Pirates' attention when he bumped into catcher Francisco Cervelli when scoring a run, Muncy had three hits.

Bellinger's fourth-inning homer started the comeback. Corey Seager hit a two-run double in the fifth and scored the tying run on Muncy's single.

Muncy singled over the outstretched glove of shortstop Cole Tucker against Richard Rodriguez (0-2) in the seventh, and Bellinger greeted left-hander Francisco Liriano with an RBI single for a 7-5 lead. Josh Bell had a run-scoring single against Urias in the eighth.

"I made one bad pitch to Bellinger today and he hit it out of the yard," Williams said.

Bellinger's 44 hits are a Dodgers record before May, one more than Rafael Furcal in 2008.

Dodgers: RHP Kenta Maeda (3-2) starts at San Francisco on Monday after giving up a season-high six earned runs against the Chicago Cubs in his last outing.