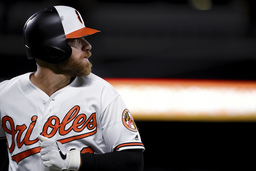 Davis reached 200 homers for his career, tying Seattle's Jay Bruce for the major league lead at seven this season.

"That's a lot of homers," Oakland manager Bob Melvin said. "Once he established himself, and certainly once he got here, he's become one of the elite power hitters in the game."

Chris Davis entered as a pinch-hitter in the ninth and flied out to center off Yusmeiro Petit. Davis is 0 for 29 this season and hasn't gotten a hit since Sept. 14.

"I felt like it was a good matchup. I really liked his swings," Orioles manager Brandon Hyde said. "He was out in front of a couple changeups. I liked his takes. I thought he wasn't rushing out."

"I'm just happy with the way he's performed this year," Melvin said about Montas. "We knew he had it in him. It's just coming up with the third pitch and then having some success behind it."

Trey Mancini and Rio Ruiz each homered for the rebuilding Orioles, who have lost six of seven and fell two games below .500 for the first time this season.

"I was just kind of looking for something out over the plate," Mancini said. "He threw it there. I just tried to put a short, compact swing on it and luckily it took off."

Pinder provided the early lead with a solo homer in the second off Dan Straily (0-1). The A's increased the lead to 3-0 an inning later when Chapman, who went 3 for 4, had an RBI double and scored on a single by Khris Davis.

Profar homered for the second straight night with a two-run shot in third for a 5-0 lead.

Straily, who was signed Friday after being released by the Miami Marlins, started in place of the injured Alex Cobb and allowed five runs and eight hits over 3 1/3 innings.

Khris Davis boosted the lead to 7-0 in the fifth with a two-run homer off left-hander Josh Rogers, who was recalled from Triple-A Norfolk prior to the game and optioned back afterward.

"I made a little adjustment and was just trying to work on something different and just remembered something and it showed up," Khris Davis said.

Montas retired 12 in a row before Mancini hit his sixth home run in the fifth. After Renato Nunez singled to left, Ruiz hit another homer that cut the lead to 7-3.

The Athletics added on in the seventh when Chapman and Davis hit back-to-back homers off Rogers.

The Orioles have allowed 23 home runs over six games of the homestand against the Yankees and Athletics.

Athletics: RHP Chris Bassitt, on the injured list with a lower right leg contusion, allowed one run and struck out five while throwing 53 pitches in three innings for Triple-A Las Vegas on Tuesday. Manager Bob Melvin said Oakland will try to stretch Bassitt out further in his next rehab start. ... OF Nick Martini has started to run as he returns from a sprained right knee.

Orioles: Cobb (lumbar strain) could be available to start April 16 when he is eligible to come off the injured list.

Athletics: RHP Aaron Brooks (1-1, 4.09 ERA) starts against Baltimore for the first time in his career as Oakland wraps up the four-game series. He faced the Orioles twice as a reliever, allowing one run and one hit over one inning.

Orioles: RHP Dylan Bundy (0-0, 7.36 ERA) is looking to get on track after throwing just 3 2/3 innings in each of his previous two starts.