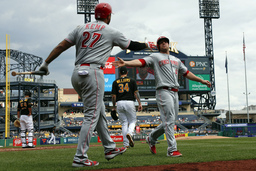 PITTSBURGH (AP) Kevin Newman put the ball in the left-center gap - the most spacious place in PNC Park - and Francisco Cervelli turned on the jets.

Newman lined a double in the 10th inning and Cervelli scored from first base, diving home with the game-ending run to lift the Pittsburgh Pirates over Cincinnati 6-5 Saturday for the Reds' seventh straight loss.

With one out, Cervelli singled off Reds reliever Raisel Iglesias (0-2). Newman drove the first pitch he saw to the 410-foot left-center notch, and Cervelli easily beat the relay home. It was the first walkoff hit of Newman's career.

"Just a good pitch to swing at," Newman said. "The first pitch was a fastball. I thought I could handle it. I put a good swing on it and it worked out."

Francisco Liriano (1-0) struck out two in the top half of the inning.

The Pirates improved to 4-3 on the season, with three shutout victories. This time, it was the offense getting it done.

"It's awesome," Bell said. "Kind of flipped the narrative a little bit. The offense picked up the pitching staff. Inning after inning, coming back, creating a game and then for us to close it out like that was something special."

Cincinnati dropped to 1-7, the only win coming on opening day.

Joey Votto tied it in the eighth with his first home run of the year, a solo shot off Keone Kela. It was Kela's second blown save in five appearances.

"That's not a bad pitch, that's a great hitter doing something that only one or two hitters in the game can do," Pirates manager Clint Hurdle said. "You tip your hat and move on."

"It was gonna be a boxing match, really, the whole game," Williams said. "We were trading blows."

The Reds broke a 30-inning scoreless streak, the team's longest since 2015, when Kyle Farmer hit a two-run home run in the third. The Reds entered with an MLB-low .157 batting average and just three homers.

"We've been struggling to get the wins and we need to do that for sure," manager David Bell said. "But at the same time, I think scoring five runs after not scoring for a few days was big. I think we can build on that."

The blast was Farmer's first homer in his 64th career game.

"I think any way we could've gotten a run would've been great," he said.?"Luckily, it was my first home run to help out the team, so I was happy about that."

Pirates outfielder Jason Martin made his major league debut and got his first hit, first stolen base and scored his first run when Bell drove him in in the first inning. Martin finished 1 for 2 with a walk out of the leadoff spot.

"It was amazing," Martin said. "I can't even put it in to words how I felt after getting that hit."

Newman nearly scored on Williams' bunt in the second inning but was called out via replay. Roark barehanded the bunt, spun awkwardly and threw high to catcher Curt Casali. Newman was originally called safe, but video showed his front foot skipped over home plate.

Reds: RHP Anthony DeSclafani (0-0, 1.80 ERA) will start the series finale Sunday. He allowed one run and struck out eight in five innings in his season debut against Milwaukee on Tuesday.

Pirates: Chris Archer (0-0, 0.00) had eight strikeouts in his first 2019 start against St. Louis on Monday, but it took him 99 pitches to get through five innings.