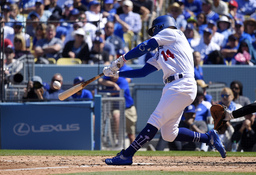 LOS ANGELES (AP) While one homer after another rocketed into the stands at Chavez Ravine, the Los Angeles Dodgers' dugout celebrations became increasingly incredulous.

Five homers in the first six innings? Followed by three more in swift succession in the seventh? Even the Dodgers' power-packed lineup was impressed by itself.

"We were all wondering if it was a record," Enrique Hernandez said with a grin.

After the Dodgers finally finished hitting eight home runs in a 12-5 victory over the Arizona Diamondbacks on Thursday, they all agreed they had never experienced an opening day quite so powerful.

Neither had any team in major league history, actually.

Hernandez and Joc Pederson each homered twice as Los Angeles set the big league record for homers on opening day and tied the franchise mark for any game.

The Dodgers' pursuit of a third straight National League pennant and seventh consecutive NL West title got off to a thrilling start, with no trace of a hangover from that World Series-ending loss to Boston in their previous game on this field last October.

Hernandez, Austin Barnes and Corey Seager all homered in the fourth inning to chase Arizona ace Zack Greinke. Max Muncy, Cody Bellinger and Hernandez then connected in a four-batter stretch of the seventh, abruptly obliterating the opening day record of six homers set by the Mets in 1988 and matched by the White Sox in 2018.

"This is a fun offense," Muncy said. "A couple of guys go out and get a homer, and it makes you want to get one of your own."

Los Angeles also equaled the franchise mark for a game set against Milwaukee on May 23, 2002, when Shawn Green hit four of the Dodgers' eight.

"Hitting is contagious," Bellinger said. "You see guys hit, and you want to get into the party."

The Dodgers finished second in the majors last season with 235 homers, and they were even more potent in their first regular-season game under new hitting coach Robert Van Scoyoc. All eight dingers were hit by returning players to the Dodgers, who have only two new position players on their opening day roster.

"Everyone kind of knocked us last year for scoring too many runs off homers," Muncy said. "But if you're going to do it, you might as well do it like that."

Meanwhile, Greinke's latest return to Dodger Stadium was a debacle.

The $206.5 million right-hander allowed four homers for the fifth time in his career, but only the second time this decade. The Dodgers also hit four against their former star on Sept. 5, 2016, in Chavez Ravine, where Greinke has allowed 14 homers in 34 innings since his big-money move to Arizona.

"Yeah, it was bad," Greinke said. "Not really much to build off, because all that stuff was bad, so that's probably the most disappointing thing."

Arizona reliever Matt Koch allowed the Dodgers' other four homers over a seven-batter stretch in the sixth and seventh. The embarrassing loss added to a rough week for the Diamondbacks, who lost probable cleanup hitter Steven Souza Jr. to a season-ending knee injury Monday.

"You band together, and you get off the ropes, stagger back into the middle of the ring and keep punching," manager Torey Lovullo said. "And I know this team will do that."

Pederson delivered as the Dodgers' leadoff hitter. After doubling and scoring in the first inning, he hit one of Greinke's curveballs 420 feet to straightaway center in the second. He added a two-run shot off Koch in the sixth before the Dodgers reached historic homer territory in the seventh.

Two outs after Hernandez and Barnes hit back-to-back homers, Seager chased Greinke with his first homer since April 28. Seager was back in the Dodgers' lineup for the first time since missing nearly all of last season due to Tommy John surgery.

A.J. Pollock played center field and batted fifth in his Dodgers debut, going 0 for 3 with a walk. Pollock, who spent the previous seven seasons with the Diamondbacks, and Justin Turner were the only Dodgers starting position players who didn't homer.

Jones went 2 for 4 while batting leadoff for the Diamondbacks, who signed the 33-year-old outfielder 17 days ago. Jones spent the previous 11 seasons in Baltimore, making five AL All-Star teams.

Diamondbacks: Lovullo put Walker at first base on opening day instead of Jake Lamb, who was injured for part of spring. Paul Goldschmidt had been Arizona's starting first baseman for the previous seven opening days.

Dodgers: Kershaw formally went on the injured list before the game along with lefties Rich Hill and Tony Cingrani.

Ross Stripling is back in the Dodgers' rotation for now, and the versatile 2018 All-Star welcomes the chance to prove himself while Kershaw and Hill are out. He faces Arizona lefty Robbie Ray, who looked great during spring training with 32 strikeouts in 16 1/3 innings.