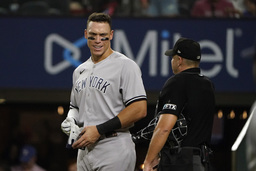 Aaron Judge could have two opportunities to reach the elusive No. 62 homer mark on Tuesday as the New York Yankees play a doubleheader against the Texas Rangers in Arlington, Texas.

The question is if the Yankees (98-61) will play their MVP candidate outfielder in both games.

In the Yankees' 3-1 win over Texas on Monday, Judge went 1-for-4 with a check-swing single.

Manager Aaron Boone said during his pregame radio show on Monday that he has had several talks with Judge about dealing with the pressure of chasing a record that has stood for 61 years.

"Just little conversations that I've had with him all the time," Boone said. "Look, nobody is more equipped to handle it, and deal with all the madness around it. But at the same time, he is human. It has been a lot. Hopefully, he can knock it out."

Along with his chase for 62 home runs, Judge has a chance to win the Triple Crown. Judge leads the AL in homers and RBIs (130), and his .311 batting average is second to the .315 mark of the Minnesota Twins' Luis Arraez.

"A Triple Crown would be amazing," Judge said. "I think we're still a long way from that."

Gray is winding down his first season with the Rangers.

This will be his second start against New York this year. On the road on May 9, Gray didn't allow a run in 4 1/3 innings during a no-decision. Judge walked and grounded out vs. Gray in that contest, their only head-to-head matchup.

In two career starts against the Yankees, the right-hander has a 4.32 ERA and no decisions.

Cole faced the Rangers on May 8 at home, and he gave up one run in 6 1/3 innings with a walk and 10 strikeouts in a no-decision.

While the Yankees can use these final games to rest regulars, the Rangers have spent most of the second half evaluating their young players while providing opportunities for some veterans to go for personal milestones.

Marcus Semien scored his 100th run on Sunday, and the second baseman also has a chance to have a 25-homers and 25-steal season. Entering the doubleheader, he is sitting on 26 homers and 24 steals.

"I play a lot of games, so I want to get on base and score runs," Semien said. "I feel like in the years coming, I want to set my goals even higher. Let's see what I can do."