Mariners fret about Sam Haggerty before DH with Tigers 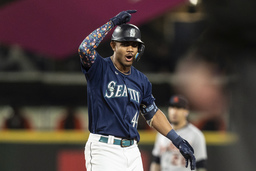 It was an unsurprising Sam Haggerty move.

Trailing the Detroit Tigers by a run with two outs in the bottom of the ninth inning Monday night, the Seattle Mariners needing a victory to maintain their hopes of playing host to a wild-card playoff series, Haggerty singled to center and then stole second.

However, Haggerty hit the bag hard and slid awkwardly past second base, holding on by his fingertips with one hand as he began shouting in pain and grabbing his upper left leg with the other hand.

Haggerty was unable to put any pressure on the leg as he was helped off the field by manager Scott Servais and a team trainer. It appears doubtful the utility man will be available for the Mariners' Tuesday afternoon doubleheader against the Tigers, and his status for the postseason is uncertain.

Just as the Mariners seemed to be getting healthy for their first playoff appearance since 2001 -- Rookie of the Year front-runner Julio Rodriguez returned from the injured list on Monday after recovering from a lower back strain and went 3-for-4 with an RBI double -- down went Haggerty.

"Getting to the end of the regular season is always a challenge," said Servais, who indicated Haggerty would undergo an MRI exam on Tuesday.

The Mariners' loss, combined with Toronto's rain-shortened victory at Baltimore, clinched the American League's top wild-card berth for the Blue Jays. Toronto (91-69) will play host to either the Mariners (87-72) or the Tampa Bay Rays (86-74) in the best-of-three opening playoff round.

Seattle holds a 1 1/2-game lead over the Rays for the fifth seed, with the sixth and final seed traveling to face the AL Central champion Cleveland Guardians to open the playoffs.

"With everything that happened today, we're not going to be able to host a playoff game -- in the first series -- here at T-Mobile Park, so now we've got to adjust a little bit," Servais said. "The focus right now is trying to get as healthy as we can, as rested as we can, before we start our series on Friday, and that will be challenging."

The Tigers (66-93), long ago reduced to spoilers, have excelled in that role. Javier Baez hit a two-run homer in the Detroit's 4-3 victory on Monday, the Tigers' third win in a row and 11th in the past 13 games.

"Obviously we wish we were playing like this the entire year," Detroit catcher Eric Haase said. "It was obviously in there. But we're trying to finish strong and just make whatever good we can to finish the year."

Detroit manager A.J. Hinch was impressed by the atmosphere in Seattle.

"I think their fans did an incredible job of saluting their players and being very supportive of them," Hinch said. "But I think our guys are used to playing in a good environment."

Rodriguez threw 6 2/3 scoreless innings in his most recent outing, a 10-3 win over the Kansas City Royals on Thursday. He is 4-4 with a 4.02 ERA in 10 career starts against Seattle. Rodriguez has faced the Mariners once this year, and he was bombed for six runs (five earned) on six hits in four innings during a 7-0 loss on Sept. 1.

Flexen will be making his first start since Aug. 6 after being sent to the bullpen following the trade-deadline acquisition of Luis Castillo from the Cincinnati Reds. He is 0-0 in two career appearances, one start, against Detroit. In a relief outing at Detroit on Aug. 30, he yielded three runs in four innings but got a save as Seattle won 9-3.

Neither team had announced a starter for the nightcap. Seattle lefty Marco Gonzales had been expected to pitch, but the Mariners announced after the Monday game that they would make it a bullpen game.