Phillies, on verge of playoffs, open series with Astros 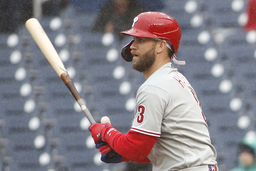 The path to snapping the longest championship drought in American sports in 1980 required the Philadelphia Phillies to win in Houston.

Forty-two years later, the Phillies are heading to Houston needing just one win to end a much smaller -- but still plenty lengthy -- dry spell.

The Phillies will look to clinch the last remaining National League wild-card spot Monday night when they visit the Houston Astros in the opener of a three-game series.

Both teams earned wins Sunday afternoon. The Phillies inched closer to the playoffs by defeating the visiting Washington Nationals 8-1 in a game shortened to six innings due to rain. The host Astros won their second straight by edging the Tampa Bay Rays 3-1.

The win by the Phillies (86-73), coupled with the Milwaukee Brewers' 4-3, 12-inning loss to the Miami Marlins, reduced the Phillies' magic number for clinching a playoff spot to one. Philadelphia has the tiebreaker over the Brewers (84-75) by virtue of winning the season series.

The Phillies, who are one game behind the San Diego Padres (87-72) in the race for the second NL wild card and fifth seed, haven't made the playoffs since 2011 -- the longest drought in the major leagues. The Seattle Mariners clinched their first postseason berth since 2001 on Friday night.

This drought isn't nearly as epic as the 97-year wait that ended with Philadelphia winning the final two games of the 1980 NL Championship Series in Houston on its way to winning the first World Series in franchise history.

But it's long enough for the Phillies -- especially for players such as J.T. Realmuto, who have never appeared in the postseason.

"This is what you play for," Realmuto said. "We play to win and to get to the postseason and win a World Series. It's fun to be in the race and fun to have a chance. We've just got to go out there and play our type of baseball and take care of business."

Taking care of business hasn't been an issue in quite some time for the Astros (104-55), who are in the postseason for the sixth year in a row and won the World Series in 2017.

With the No. 1 seed in the AL playoffs -- and home-field advantage until at least the World Series -- locked up, the final series of the season is a tune-up for the Astros.

McCullers has made just eight starts this season and was scratched from his scheduled outing last Tuesday due to illness. But he is expected to be in the postseason rotation over options such as Luis Garcia, who was available out of the bullpen in late September and started for McCullers last Tuesday before earning his 15th win on Sunday against the Tampa Bay Rays.

"We've got to see who's going to be on the team in the first round, where we're going to slot them," Astros manager Dusty Baker said Sunday.

McCullers has never opposed the Phillies. Nola won his lone start against the Astros on July 26, 2017, when he threw six scoreless innings in the Phillies' 9-0 victory.