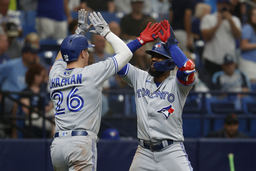 The Toronto Blue Jays might be turning it on at just the right time.

Already locked into the postseason, the Blue Jays can clinch home field for the wild-card round with the right results early this week.

There are three chances to do that, beginning Monday night to open a three-game series against the Orioles in Baltimore.

The Blue Jays (90-69) are riding a three-game winning streak after a sweep of the Boston Red Sox, winning those games by a combined score of 25-3. Toronto has won six of its last eight games.

"We have the talent to do it," second baseman Whit Merrifield said. "Just a matter of getting hot at the right time."

Only the Seattle Mariners can catch Toronto for the top wild-card spot. The magic number for the Blue Jays to seal the homefield advantage for that round is two -- so any combination of a Toronto victory and a Seattle loss. Toronto would lose a tiebreaker with the Mariners.

"We're ready to deal with it however it shakes out," Blue Jays manager John Schneider said. "I'm just excited that we're in this position."

Even with the Blue Jays turning up the success level after a managerial change, they likely aren't the most surprising team in the American League. That tag might belong to the Orioles -- even though Baltimore missed out on the playoffs.

The Orioles (82-77) are assured of a winning season, which by itself seems like an accomplishment for a team most forecasters didn't predict to check in with many achievements.

"A 30-win difference (from last season) and still got a few games to go," Baltimore manager Brandon Hyde said.

The Orioles have a winning season for the first time since 2016.

"I think that's something we should be proud of, for sure," relief pitcher Bryan Baker said.

The Blue Jays and Orioles have split 16 meetings this year. This three-game series will mark the eighth, nine and 10th meetings between the teams in a month's span.

The Orioles have gone 2-4 in their last six games, though they won two of three against the Yankees in New York.

Toronto's starter will be right-hander Jose Berrios (11-7, 5.37 ERA), who will look to snap a two-game personal losing streak. The good news for the Blue Jays is that both of Berrios' victors since Aug. 18 have come against the Orioles.

Berrios went six innings in each of those starts, allowing a total of five runs (four earned).

With two shutouts in the last three games for Toronto pitchers, there's a good vibe on the mound.

Right-hander Dean Kremer (8-6, 3.17) will be Baltimore's starter Monday. He went 0-1 in two September starts against the Blue Jays. He was hurt by seven walks in the 11 combined innings in those outings. Kremer did win an Aug. 16 start at Toronto by logging seven innings and allowing two runs.