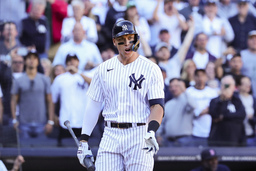 Judge gets a fifth chance at the milestone Sunday night when the Yankees (93-58) seek a seventh straight win and go for the four-game home sweep of the Boston Red Sox (72-79).

Judge is 3-for-13 with five walks since getting his 60th homer in the ninth inning Tuesday against Pittsburgh. He enters the final meeting of the season against Boston hitting .432 (35-for-81) with 11 homers and 19 RBIs during a 23-game on-base streak.

The closest Judge has gotten to matching Maris was a pair of fly balls that reached the warning track, one in Thursday's game and one Friday. On Saturday, Judge went 0-for-3 with a flyout to center, a walk and two strikeouts in New York's 7-5 win.

"Even for a guy that hit 60 home runs, he still doesn't hit them every day," Yankees manager Aaron Boone said. "A lot of things got to line up to go deep, even for the best of the best. So as long as he continues to take good at-bats and make good swing decisions, it'll happen sooner rather than later."

While Judge has four regular-season home games left, sandwiched around a three-game series that starts Monday in Toronto, the Yankees are on their longest run since posting nine consecutive victories June 9-18.

The Yankees opened the series with a game-ending single by Josh Donaldson in the 10th on Thursday, then got a second straight 5-4 win when Jose Trevino hit a tiebreaking single in the eighth inning on Friday.

On Saturday after Judge struck out in the seventh, Anthony Rizzo hit a tiebreaking two-run homer for the victory.

"It's not only him," Boston manager Alex Cora said of Judge and the Yankees. "They're getting healthy which is important for them but like I said when we got here, the game will dictate what we do, and I think overall we have done an outstanding job."

Boston is trying to salvage the series finale after getting homers from rookie Triston Casas and Reese McGuire on Sataurday along with a game-tying single from Alex Verdugo. Xander Bogaerts had two hits to hike his average to an AL-best .315 -- one point ahead of Judge -- but the Red Sox were 3-for-16 with runners in scoring position on Saturday.

Judge's first attempt at his 61st homer Sunday will be against Boston rookie right-hander Brayan Bello (2-6, 4.75 ERA), who will make his 10th career start and second against the Yankees. Bello allowed three unearned runs and six hits in five innings during a 5-3 loss at Boston on Sept. 14 when Judge went 1-for-4 with an infield single.

Bello has allowed three runs or less in six straight starts, including one run on eight hits in five innings at Cincinnati on Tuesday.

"The big stage, Sunday night, Yankees-Red Sox on ESPN," Cora said. "For him to be on that stage is going to be fun."

For New York, left-hander Nestor Cortes (10-4, 2.67) will make his fourth start since returning from a groin injury. He allowed one run in five innings Tuesday but didn't figure in the decision of the New York win.

Cortes is 1-0 with a 7.04 ERA in nine career appearances (three starts) against Boston. Bogaerts is 1-for-11 lifetime off Cortes.