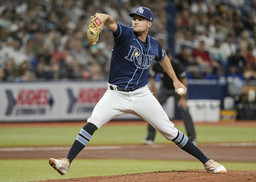 The Tampa Bay Rays are back to winning and are riding the hot bat of Isaac Paredes.

The Rays and Paredes will look for a three-game sweep of the Pittsburgh Pirates when they play their second straight matinee match Sunday afternoon in St. Petersburg, Fla.

However, the defending American League East champions will face a difficult task in topping the dramatics of Saturday's win -- thanks largely to Paredes.

With the Rays trailing 5-3 in the eighth, Paredes hit his fifth homer in three games -- he hit three Tuesday against the New York Yankees -- but he saved his best hit for the ninth inning when the Rays loaded the bases after Pirates closer David Bednar had retired the first two batters.

Down 0-2 in the count, Paredes slashed a sharp single to right to score two as the Rays posted a walk-off win for the second straight game.

In probably the best three-game stretch of his career, the 23-year-old Paredes is 7-for-12 with five homers and eight RBIs.

"I was very confident going into the at-bat, and the confidence the players gave me in the at-bats before me was great," said Paredes, who leads the club in homers.

The Rays acquired Paredes from the Detroit Tigers for outfielder Austin Meadows on April 4.

Paredes has 10 home runs. Meanwhile, Meadows hasn't gone deep in 36 games and is set to begin a rehab assignment after clearing COVID protocol.

Added Rays manager Kevin Cash of Paredes: "He's fun to watch. ... He's a guy who can shoot the ball the other way late in counts."

The Pirates wasted a good start from JT Brubaker, a solo shot for the second straight game from Diego Castillo, and a gigantic blast from rookie slugging sensation Jack Suwinski.

The lefty-hitting Suwinski, who leads all first-year players with 12 homers, jumped on a four-seam fastball from reliever Jalen Beeks in the sixth inning -- driving in three and erasing Tampa Bay's 3-2 lead and putting the visitors in a good position to win for the fourth time this week.

Suwinski's rocket landed 443 feet away, smashing into the back wall behind the right-field seats. It was the second-longest homer in the domed ballpark in 2022 -- only a blast from Chicago White Sox first baseman Jose Abreu went deeper (446).

To top it off, Suwinski made a spectacular catch on Luke Raley's foul fly ball, snaring it while falling into a fan seated along the wall.

A 2016 15th-round draft pick out of high school in Chicago, the 23-year-old Suwinski is hitting .214 with 22 RBIs. He had a three-homer showing last Sunday against San Francisco.

"The thing with Jack is, if you watch him on a daily basis, nothing really affects him," Pittsburgh manager Derek Shelton said. "He never gets too high. Never gets too low."

After three mediocre relief appearances to open the 2022 campaign, right-hander Roansy Contreras (2-1, 2.89 ERA) has found his niche over six straight starts and will make his first one against the Rays on Sunday.

The southpaw has wins in six of his past seven decisions, and opposing hitters are batting a lowly .185 against him.