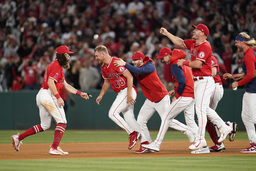 Los Angeles Angels left-hander Reid Detmers made history in his most recent start, no-hitting the Tampa Bay Rays in a 12-0 victory.

Meanwhile, Texas Rangers left-hander Taylor Hearn made quick work of the Kansas City Royals in his last outing, allowing one hit in five shutout innings in a 3-1 victory.

Hits may be hard to come by on Tuesday night when the two southpaws are matched up in the second of three games between the Angels and host Rangers.

There was plenty of offense in the series opener on Monday night, especially early, in the Rangers' 7-4 win. The teams combined for 17 hits.

In Game 2 on Tuesday, there will be plenty of focus on Detmers (2-1, 3.77 ERA). The lefty has not allowed many hits all season, period. In six starts, the 22-year-old averages 5.2 hits per nine innings. What makes Detmers interesting is the fact he's not overpowering. He doesn't strike out many, either, posting a ratio of 5.8 strikeouts per nine innings.

In no-hitting the Rays last Tuesday at home, Detmers struck out just two, with one walk.

His gem earned him American League Player of the Week honors. He's also the 25th rookie with eligibility remaining to throw a no-hitter. He also posted the 12th no-hitter in the Angels' history.

"It validates what you're doing," Angels manager Joe Maddon said. "It could bolster his confidence even more."

The fact he had so much run support allowed Detmers to pitch without much pressure, aside from chasing history.

"I just blacked out," he said on the field after recording the final out. "It's something I have always dreamed of. I can't even process it right now."

For the season, Detmers has allowed just 18 hits. He's been especially tough on left-handed hitters, who are 1-for-26 (.038) against him. Right-handers are batting .205 in 92 plate appearances.

Repeating history will be a tall task. The only pitcher in major-league history to record no-hitters in consecutive starts is Johnny Vander Meer, in June of 1938.

Hearn's heroics from his previous start are less celebrated in terms of MLB history. Yet his five innings of work in a win over the Royals was significant to the Rangers because Texas is in a stretch where its starting pitching has been taxed.

Hearn took the mound on Thursday. It was his first start in 11 days, and the club didn't know what to expect. The 27-year-old stepped up, striking out five while walking three. The lone hit he allowed was an infield single by Michael A. Taylor that deflected off Hearn's leg.

"We weren't sure how he was going to respond after being out so long," Rangers manager Chris Woodward said.

This won't be the first time Detmers faces the Rangers this season. In his first meeting, a no-decision on April 15, he was tagged for five earned runs on six hits in 3 1/3 innings.

Hearn faced the Angels on April 16 on the road, and suffered the loss, giving up three runs on six hits in 3 2/3 innings.

Angels first baseman Jared Walsh singled in the fourth inning on Monday night, extending his streak to 26 straight games with at least one hit against the Rangers.