Astros carry momentum from late rally into Game 5 at Boston 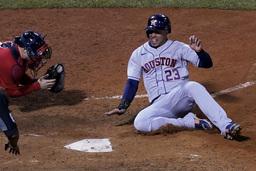 BOSTON -- One crooked inning on Tuesday night sent the Houston Astros and Boston Red Sox back to square one.

Now a best-of-three between the Astros and Red Sox will decide which team will advance to the World Series, starting with Game 5 on Wednesday night in Boston.

The Red Sox had outscored the Astros 21-8 while winning Games 2 and 3 to take a 2-1 series advantage.

In the ninth, Jason Castro's two-out RBI single opened the floodgates for the Astros to make it a brand new series.

"We're all going to bounce back. It's who we are," said Red Sox ace Chris Sale, who will start Game 5. "We're tied now, and we've got one more at home. ... We've got to take this last one, hop on the plane to Houston and take care of business down there."

"It's going to be a fun game, man," Houston shortstop Carlos Correa said. "Sale versus Valdez. You've got two great pitchers. It's gonna be great, so make sure you tune in."

Neither Valdez nor Sale was effective in Houston's 5-4 victory in Game 1 on Friday.

Valdez will be making his third start of this postseason. He tossed 4 1/3 innings of four-run, seven-hit ball, with a walk and six strikeouts, in Houston's 9-4 win against the Chicago White Sox in Game 2 of the teams' AL Division Series.

Despite his struggles this October, Valdez has posted a respectable 3-1 record with a 3.19 ERA in six career postseason games (five starts). In regular-season outings against Boston, the 27-year-old lefty is 2-1 with a 1.59 ERA in four total appearances (two starts).

Sale has earned his reputation as one of the premier southpaws in the game, but his numbers in the postseason have been far from dominant. In nine career playoff games (six starts), Sale has gone 1-2 with a 6.91 ERA.

His last start prior to Game 1 did little to reverse that trend, as Sale was pulled after serving up five first-inning runs on four hits -- including a grand slam by Tampa Bay's Jordan Luplow -- in Boston's wild 14-6 comeback win over the Rays in Game 2 of their ALDS.

The seven-time All-Star has faced Houston in nine regular-season starts, going 5-3 with a 2.20 ERA.