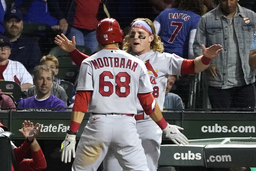 The St. Louis Cardinals will bid for their team-record 15th consecutive victory when they visit the Chicago Cubs Saturday.

The Cardinals (85-69) swept the Cubs 8-5 and 12-4 in a doubleheader Friday to push their winning streak to 14 games, which tied the 1935 team for longest in franchise history.

They increased their lead over the Philadelphia Phillies to five games for the second National League wild-card spot. They reduced their magic number for reaching the playoffs to four with eight games to play.

"It's unbelievable, it's really unbelievable," Cardinals outfielder Lars Nootbaar told Bally Sports Midwest after hitting two homers in the second game Friday. "The guys are just having a great time in the clubhouse, we got out here and have a good time, we feed off of each other."

Meanwhile the rebuilding Cubs (67-87) have lost 11 of their last 13 games. But manager David Ross figured his youthful squad could benefit from facing the streaking Cardinals.

"They're the hottest team in baseball right now," Ross said. "They're coming in playing really good baseball. I think it's a great environment for a lot of these guys, the young guys."

Cardinals starting pitcher Jon Lester (7-6, 4.59 ERA) has won his last two starts and he has allowed two earned runs or fewer in his last six starts. He has allowed just nine runs on 26 hits in last 35 2/3 innings.

His 5-2 victory over the Brewers on Monday was the 200th in his career.

"What a tremendous addition. He's done a great job," Cardinals manager Mike Shildt said. "This guy's got such heart. He's like John Wayne. He's got that true grit. Big, strong silent type. That's a heck of a milestone."

Lester lost his only start this season against the Cubs, one of his former teams, while pitching for the Washington Nationals in May. He allowed five runs on eight hits, including three homers, in 5 1/3 innings.

Adrian Sampson (1-2, 2.84) will make his ninth appearance and fourth start of the season for the Cubs. Sampson is 1-0 with a 1.69 ERA in his career against the Cardinals.

He will deal with an offense that scored 20 runs against the Cubs Friday night as Paul Goldschmidt and Tyler O'Neill hit their 30th homers to join teammate Nolan Arenado in the club this season.

"That's a heck of an accomplishment," Shildt said. "Those three guys, there's a reason why we're doing what we're doing -- a lot of reasons, actually -- but those three are big ones."

The Cardinals will play without shortstop Edmundo Sosa, who suffered a hand contusion in Game 1 of Friday's doubleheader when he was hit by a pitch. He is expected to miss several games.