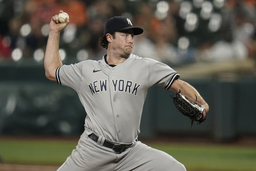 Two games are all that separate the Boston Red Sox and the New York Yankees in the American League wild-card standings as the clubs square off in Boston for a pivotal three-game series beginning Friday.

The Red Sox (88-65) have seized control of the top wild card spot behind a seven-game winning streak. Boston has scored at least six runs in each contest and 59 total during the stretch.

The Yankees (86-67) enter a day off Thursday in sole possession of the second wild card, though the Toronto Blue Jays could close a half-game gap with a win over the Minnesota Twins in the evening. New York rebounded from a 1-3 dip with a three-game sweep of the Texas Rangers at home.

The top two wild-card clubs face off in a one-game playoff, with the No. 1 team hosting. The winner advances to the AL Division Series, while the loser goes home.

Yankees right-hander Gerrit Cole (15-8, 3.03 ERA) will take the mound after one of his worst performances of the season in his last outing. Righty Nathan Eovaldi (10-8, 3.58) gets the nod for the Red Sox.

Last time the clubs met, New York swept a three-game series over the course of two days. The Yankees have won six of the last nine meetings in the season series after an 0-7 start.

Winning at least two games this weekend would be key for the Yankees, as they next travel to face the Blue Jays in a three-game series before ending their season at home with three games against the first-place Tampa Bay Rays.

"It's always a challenge when you play three really good teams in Toronto, Boston and Tampa," said catcher Kyle Higashioka after driving in a pair of runs in a 7-3 victory over the Rangers on Wednesday. "We're up for it. If we're not up for it, we're going to be heading home, so we know what's at stake."

After the weekend, the Red Sox hit the road to finish their regular season with three-game visits to two losing clubs, the Baltimore Orioles and Washington Nationals.

"We want to be able to keep winning and get to the postseason and keep winning in the postseason," said trade deadline pickup Kyle Schwarber, who homered twice and had four RBIs in a 12-5 rout of the New York Mets on Wednesday. "Postseason baseball, it's addicting. It's a different kind of baseball. It's something you want to get to every single year."

Cole lamented his effort against the Cleveland Indians in his last start, when he allowed seven runs on 10 hits over 5 2/3 innings in an eventual 11-1 loss. The ace has been spotty this month, with a 4.64 ERA in four starts.

Eovaldi held the Orioles to three runs over five innings for his sixth straight no-decision last time out. The veteran is 12 strikeouts shy of his first 200-K campaign.