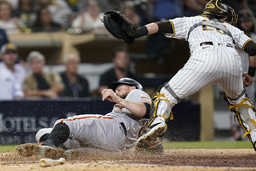 A couple of pitchers plucked from the scrap heap are expected to get the ball in a crucial game when the first-place San Francisco Giants and fading San Diego Padres continue their three-game series Wednesday night in San Diego.

LaMonte Wade Jr.'s go-ahead single in the ninth inning in the series Tuesday opener allowed the Giants (98-53) to preserve their one-game lead atop the National League West with a 6-5 victory, while pushing the Padres (76-74) to the brink of elimination in the NL wild-card race, dropping them five games back with just 12 to play.

Injuries in the starting staff have forced managers Gabe Kapler of the Giants and Jayce Tingler of the Padres to scramble in Wednesday's rematch.

Kapler has elected to go with left-hander Scott Kazmir (0-1, 6.43 ERA) in the spot normally occupied by the injured Johnny Cueto (elbow). To make it happen, the Giants will have to formally promote the veteran from Triple-A Sacramento.

Signed to a minor-league deal earlier this year, Kazmir hasn't won a major-league game since 2016, but he's won four times this season -- three times at Sacramento and once in Tokyo while pitching for Team USA in the Olympics. The 37-year-old made three appearances for the Giants before the Olympics, giving up five runs in seven innings.

Kazmir has made five career starts against the Padres, going 1-0 with a 4.91 ERA.

His third start of the season for the Giants will come in a situation where a loss could cost the team sole possession of first place. Kapler insisted after Tuesday's win that his Giants don't think that way.

"We're the same every day. We don't get too high or too low," Kapler said. "Tonight was a really fun win. I'm proud of the way the guys battled back from an early deficit. Now we're going to turn the page and be ready for (Wednesday's) game."

The Padres are expected to turn to right-hander Vince Velasquez (3-7, 6.09), added by San Diego last week to help fill out a starting rotation that's been missing injured Blake Snell and Chris Paddack. Velasquez had been released by the Philadelphia Phillies three days earlier.

The 29-year-old made his Padres debut last Friday at St. Louis in an 8-2 loss. He allowed four runs in four innings.

Velasquez also served up four runs (three earned) in four innings when he faced the Giants with the Phillies in June. The loss dropped his lifetime mark against San Francisco to 1-4 with a 4.02 ERA in six starts.

If there was a positive to the Padres' fourth straight loss Tuesday, it was the sight of Manny Machado and Fernando Tatis Jr. celebrating Machado's two homers in the wake of their argument in St. Louis over the weekend.

Machado responded with three hits, including two homers, in the series opener, while Tatis added a pair of singles.

"We handled it internally," Machado said of the incident. "We've got a team that's trying to compete and get to the World Series. We haven't been playing such great baseball, so emotions get involved, and it gets the better of us. Those are situations that we learn (from), as leaders, as a team, as an organization. And we just get better from that."