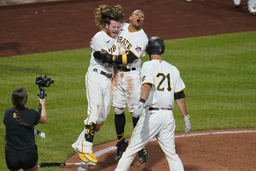 Wins are precious for the Cincinnati Reds these days, as a shot at the postseason seems to be slipping away.

The Reds have dropped four straight games and are assured of their seventh straight losing series when they conclude a three-game series against the host Pittsburgh Pirates on Thursday.

"We've just got to keep fighting and come back and keep swinging," said Reds shortstop Kyle Farmer, who hit a tying homer in the eighth inning Wednesday. "There's really no other way to say it.

"Guys are down, as they should be ... but we've just got to keep being positive, and that's we're trying to do. We've got to keep going. The tide will turn."

Before Tuesday, Cincinnati had spent 73 consecutive days in second place in the NL Central.

"We're still playing extremely important games, and that's fun," Reds manager David Bell said. "We just have to continue to work and continue to play, and it will turn around."

For the Pirates, wins are gravy these days, with each one enhancing their chances of avoiding 100 losses and providing some measure of enjoyment.

Pittsburgh will finish its longest homestand of the season Thursday assured of winning all three series. The Pirates are 6-2 through the first eight games.

The biggest bit of drama for Pittsburgh is whether it will finally sweep a series. The Pirates are the only team in the major leagues who have not swept an opponent this year.

Perhaps incredibly, this will be their 14th shot at completing a sweep.

That includes the first two series of this homestand, when Pittsburgh won the first two games against the Detroit Tigers and the Washington Nationals before dropping the third contest each time.

On Friday at St. Louis, Mahle did not get a decision in a Reds win, giving up two runs and four hits in six innings, with six strikeouts and two walks.

In eight career starts against Pittsburgh, Mahle is 3-5 with a 3.43 ERA. That includes wins in his two starts against the Pirates this year, during which he compiled a 2.19 ERA and 17 strikeouts in 12 1/3 innings.

Overton, 28, will be making his first major league start. He has made his first five career appearances this year, all in relief, the first four with the Toronto Blue Jays.

In his only appearance for the Pirates, who claimed him off the waiver wire last week, Overton pitched one scoreless, hitless inning of relief with one strikeout Sunday against Washington.