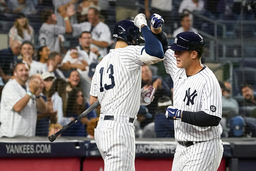 Six games in, Anthony Rizzo is off to a terrific start for the New York Yankees, and it appears the rest of the team's offense may be heating up.

Rizzo's hot start has helped the Yankees get rolling. New York can move a season-high 10 games over .500 when it hosts the Seattle Mariners on Thursday night in the opener of a four-game series.

Since being acquired from the Chicago Cubs on July 29, Rizzo is 8-for-20 (.400) with three homers and six RBIs. The first baseman is the first player to record an RBI in each of his first six games for a team since Bobby Murcer with the 1977 Chicago Cubs.

"To be able to come in at the trade deadline and have success right away is something I'll never take for granted," Rizzo said.

The Yankees are 5-1 since Rizzo's arrival, including 13-1 and 10-3 wins over the Baltimore Orioles the past two days. On Wednesday, he homered in the fourth inning after drawing a 13-pitch walk in the first inning.

"That's one of the things he's known for and one of the things we love about him is he's another one of those guys that makes it difficult (for the opposing pitcher), and the more we can do that as a group, the better we'll be offensively," Yankees manager Aaron Boone said.

The Mariners, who lost two of three to the Yankees in Seattle from July 6-8, are 3-3 to start their current 10-game road trip. They dropped two of three in Texas and then took two of three from Tampa Bay.

On Wednesday afternoon, the Mariners dropped a 4-3 decision to the Rays. Mitch Haniger had three hits, but the Mariners struck out 12 times while drawing just one walk.

"I love what we're doing, I really do," Mariners manager Scott Servais said. "We're not taking a back seat to anybody. We're ready to compete no matter who we're playing. I'm looking to the series in New York. It's going to be fun, a fun weekend."

Nestor Cortes Jr. (0-0, 1.93 ERA) will make his fourth start Thursday for the Yankees, who were considering starting him Tuesday in place of Gerrit Cole but opted for Luis Gil instead.

Cortes owns a 1.38 ERA as a starter this season. He got a no-decision July 28 in Tampa Bay when he allowed one run on three hits in five innings.

Cortes appeared in five games for Seattle last season. His lone appearance against the Mariners was 1 2/3 innings of one-run relief on Aug. 26, 2019.

Tyler Anderson (5-8, 4.39 ERA) will make his second start for Seattle after being acquired from the Pittsburgh Pirates on July 28. In his Mariners debut on Saturday in Texas, he allowed three runs on six hits in 5 1/3 innings and ended up with a no-decision.

Anderson will be facing the Yankees for the first time in his career but starting a game in New York for the second time in less than a month. On July 10, he allowed two runs on six hits in five innings to beat the Mets in the first game of a doubleheader.