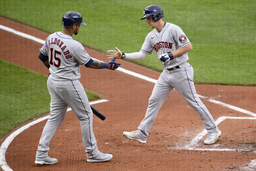 The Houston Astros will look to extend their winning streak to 10 games when they try to sweep the host Baltimore Orioles in the finale of a three-game series on Wednesday night.

Houston led the majors in several offensive categories entering Tuesday's game, but even though the Astros didn't do as much as usual at the plate, they never trailed in a 3-1 victory.

The Astros finished with eight hits and could have scored more runs if they hadn't stranded eight runners and gone 0-for-7 with runners in scoring position.

Myles Straw supplied most of the offense with a solo homer and what turned out to be the game-winning hit with a run-scoring single in the seventh. The home run appeared to hit the top of the left-field wall and came back into the field of play and was first ruled a double before the call was overturned.

This was his second homer this season and the third of his major-league career. Two of those homers came at Oriole Park at Camden Yards, including the first of his career on Sept. 29, 2018, a solo shot in a Houston win.

"I like hitting here," Straw said after the game. "It's a good place to hit."

Zack Greinke allowed only one run on five hits in 7 1/3 innings. He had not pitched against the Orioles since 2010 while with Kansas City but kept Baltimore quiet on this night.

Cedric Mullins drove in the only Baltimore run with a sacrifice fly in the third, in which center fielder Straw made a diving catch.

The Astros have the best record in the American League at 45-28.

Shortstop Carlos Correa is expected to return to the lineup on Wednesday after manager Dusty Baker gave him the night off on Tuesday so he could rest.

Right-hander Jose Urquidy (5-3, 3.65 ERA) will try to close out the sweep for Houston in his first outing against the Orioles in his career.

Thomas Eshelman (0-0, 1.93) will start for Baltimore and will make his debut against Houston. The right-hander was called up from Triple-A Norfolk when Bruce Zimmermann (biceps tendinitis) went on the injured list.

The Orioles have not been able to do much against Houston's pitching in this series. They did not get a hit until the eighth inning Monday and finished with just two in a 10-2 loss.

Baltimore fared a bit better Tuesday, ending up with six hits, but the Orioles have a total of three runs and eight hits in the first two games of the series. The Orioles have lost four straight.

They had to compete again without Anthony Santander in the starting lineup. He missed Monday's contest and only pinch-hit late in the Tuesday loss due to problems from the sore left ankle that's been bothering him for a while.

Before the game, the Orioles called up pitcher Mickey Jannis, who relies heavily his knuckleball, from Triple-A Norfolk, where he had a 2.92 ERA in 24.2 innings this season.

The 33-year old who was drafted in the 44th round in 2010 will make his major-league debut the first time he plays. Baltimore also designated pitcher Mac Sceroler for assignment after he allowed three runs on two hits with two walks and two strikeouts in one inning on Monday.