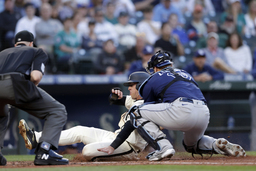 J.P. Crawford is back where he believes he belongs ... at the top of the Seattle Mariners' batting order.

Judging by his recent play, he just might stay there.

Crawford hit a grand slam and later scored the winning run in the 10th inning as the Mariners posted a 6-5 win over the visiting Tampa Bay Rays on Saturday night.

Seattle will try to complete a four-game sweep when the series concludes on Sunday.

"Definitely, I don't want to move out of there," Crawford said. "I mean, hopefully, I'm going to make it hard for someone to come take that spot again. But I mean, I'm going to keep putting together these good ABs, hopefully I lock that spot up."

After leading off in 48 of the 53 games in which he played in the pandemic-delayed 2020 season, Crawford struggled this spring. Manager Scott Servais put outfielder Mitch Haniger, a former All-Star who had missed most of the past two seasons with injuries, atop the order.

Then top prospect Jarred Kelenic moved into that spot when he was called up last month.

But Kelenic struggled, hitting just .096 before being sent back to Triple-A Tacoma.

Crawford got another opportunity and he made the most of it. In 21 games batting leadoff, he's hitting .337 with three home runs and 13 RBIs.

"I'm just thinking gap to gap," Crawford said. "I'm not the type of guy who's going out there trying to hit it in the stands. My approach is more hit the gap, hitting line drives. That's my swing. That's how I've always hit, and I kind of got away from that. But now I'm back into that zone and sticking with that approach, and it's been working."

It's been a welcome boost for the Mariners, whose .217 team batting average is the worst in the American League.

They've won six of their past seven games to climb back above the .500 mark.

Crawford's second-inning grand slam off Josh Fleming erased a 2-1 deficit. That gave the left-handed hitting shortstop a .348 average against lefties this season.

"J.P. has been incredible for us in the leadoff spot lately," teammate Ty France said. "Everyone always talks about his glove. He's a Gold Glove winner. But he can swing it too, and he's doing a great job."

The Rays have lost a season-worst five games in a row to drop a half-game behind Boston in the AL East.

Tampa Bay is scheduled to send left-hander Shane McClanahan (2-2, 4.42 ERA) to the mound Sunday to face the Mariners for the first time in his career.

Tampa Bay tied the score Saturday on pinch-hitter Brandon Lowe's home run with two outs in the ninth inning, but were unable to score in the top of the 10th.

Lowe was getting a rare day off against a right-handed starter, with Joey Wendle playing second base for the first time this season.

"Just wanted to let (Lowe) relax a little bit, and he can help us late in the ballgame with a big at-bat if needed," Rays manager Kevin Cash said before the game.