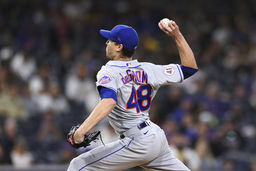 So far this season, Jacob deGrom has opposed 10 starting pitchers, a group that includes a former Cy Young Award winner, a Rookie of the Year candidate and a hurler with a no-hitter on his resume.

But it took an opponent dipping into its minor league system to find someone who might throw almost as hard as deGrom.

Robert Stock is slated to make his 2021 debut Wednesday night, when he's expected to be recalled from Triple-A Iowa to start for the visiting Chicago Cubs against deGrom and the host Mets. The contest is the third in a four-game series.

Stock, who was 0-1 with a 4.73 ERA in 10 appearances for the Boston Red Sox in 2020, will make his first big league start on Wednesday. He will oppose fellow right-hander deGrom (6-2, 0.56 ERA), who is looking to get past an injury scare and continue his historic surge.

The Mets won their second straight game Tuesday, when Taijuan Walker earned the win after striking out a career-high 12 batters over seven strong innings. Pete Alonso accounted for all of New York's RBIs in a 3-2 victory.

Stock isn't likely to pitch long on Wednesday -- he's made just two starts, both four-inning stints, at Iowa -- as he fills in for the injured Adbert Alzolay (blister). But armed with a fastball that's been clocked as high as 101 mph this season, Stock and deGrom are likely to generate plenty of eye-popping numbers on the scoreboard.

"Starting some games, been attacking hitters, getting after guys, throwing strikes. Obviously, he throws hard."

Of course, so does deGrom, who has more RBIs at the plate (five) than earned runs allowed on the mound (four) and has the lowest ERA through 10 starts of any pitcher since at least 1913. The two-time National League Cy Young Award winner was clocked as high as 102 mph last season and has thrown a whopping 128 pitches at 100 mph or higher this season.

There was some concern last Friday -- when deGrom earned the win after allowing one hit, striking out 10 and facing the minimum 18 batters over six innings in the Mets' 5-2 victory over the Padres -- that his fireballing ways might have taken a serious toll.

deGrom exited after just 80 pitches due to right flexor tendonitis, but he said afterward he wasn't concerned. A MRI administered Saturday came back clean and deGrom's between starts routine went according to form, right down to fielding grounders around the infield during batting practice Monday afternoon.

Stock tossed three scoreless innings in his lone appearance against the Mets on July 24, 2018, when he was pitching for the San Diego Padres.