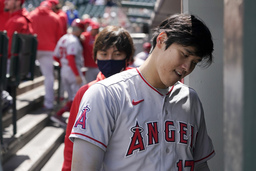 Shohei Ohtani will start on the mound for the Los Angeles Angels against the Tampa Bay Rays in Anaheim, Calif., on Wednesday night, two days after being scratched because of a sore right elbow.

Ohtani (1-0, 3.29 ERA) was hit by a pitch on the elbow Sunday but remained in the game and even stole two bases.

But Angels manager Joe Maddon decided that Ohtani would not pitch Monday against the Rays, though he did play in the game as the designated hitter and had a home run and double.

"He felt good (Monday)," Maddon said. "We wanted to make sure he went out there again and threw a little bit more (Tuesday). He was really eager to pitch (Wednesday). Like we've done everything else conversationally, I'm letting him tell me how he feels, then we're going to make our decision; so he feels really good for (Wednesday)."

Maddon hasn't announced if Ohtani also will hit in the lineup, but he usually leaves the decision up to Ohtani.

Ohtani will need a better defensive effort from the Angels than they turned in Tuesday night, when they lost the second straight in their four-game series with the Rays. The Angels made four errors, leading to three unearned runs in an 8-3 loss.

"We haven't been good," Maddon said. "We're absolutely better than that. You're talking about three really good defenders making mistakes tonight. I really feel that's going to go away. I want to believe it's an anomaly moment. I know we're better than that."

The Angels have lost three in a row and nine of 13.

Rays manager Kevin Cash said his team, which had lost three of four before arriving in Anaheim, can impact opposing defenses.

"We'll take anything right now, but it is encouraging to see the guys not take anything for granted and just put pressure on the defense," he said. "You want to be viewed as a team that's constant pressure, and we have the team to do that."

The Rays have 15 runs in the first two games of the series. On Tuesday night, Austin Meadows homered twice and drove in a career-high five runs. Kevin Kiermaier drove in two runs with a double.

Tampa Bay was forced to shuffle its pitching staff again after right-hander Michael Wacha felt tightness in his hamstring while running in the outfield before Monday's game. He was placed on the 10-day injured list. Right-hander Collin McHugh, who was out with a back strain, was activated to take Wacha's spot on the roster.

On Wednesday, Cash will turn to righty Andrew Kittredge (3-0, 1.54) as an opener, and he likely will be followed by left-hander Ryan Yarbrough.

Kittredge has been a valuable part of the Tampa Bay pitching staff in 2021. He's appeared in nine games (one start) and has a save. In 11 2/3 innings, he's given up two runs on six hits with three walks and eight strikeouts. Batters are hitting a meager .146 against him.