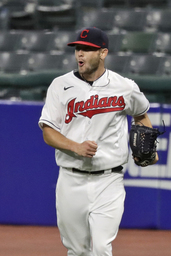 The Cleveland Indians look to follow up a sweep of a doubleheader against the visiting Chicago White Sox by bringing out the brooms in the series finale on Wednesday.

Strong starting pitching remains the name of the game for Cleveland, which has seen its rotation post a 4-0 record with a 2.32 ERA and 43 strikeouts in five contests. All five starters have worked at least six innings and allowed two or fewer earned runs in their outings.

Right-hander Zach Plesac (8-6, 3.81 ERA in 2019) will look to continue the Indians' masterful performances from the mound on Wednesday. Plesac, who was held off the Opening Day roster last week, was recently recalled to take the roster spot of injured outfielder Tyler Naquin (toe).

Plesac, 25, acknowledged that he learned a lot on the fly during his rookie season in 2019 from the other members of the starting pitching staff.

"Learning from guys like Mike (Clevinger) and moving forward with Shane (Bieber) and Carlos and (Aaron) Civale, even guys in our bullpen who are so smart at pitching, just picking their brains and learning how to tunnel my pitches off them has been incredibly helpful," Plesac said. "I have to give credit where it's due to all of them. Everyone's helping each other. That's why we're doing so great as a unit."

White Sox right-hander Lucas Giolito (0-1, 17.18 ERA this season) will get the nod against Plesac. He looks to rebound after getting shredded for seven runs on six hits -- including two homers by Max Kepler -- in 3 2/3 innings of a 10-5 loss to Minnesota on Friday.

Giolito, 26, handcuffed the Indians last season, winning both starts after scattering a total of eight hits over 14 2/3 scoreless innings. The wins evened his career mark at 2-2 with a 3.16 ERA in four career meetings with Cleveland.

Francisco Lindor is 5-for-12 in his career versus Giolito, however the hurler has gotten the better of Jose Ramirez (2-for-11) and Carlos Santana (0-for-6, three strikeouts).

Lindor homered in the Indians' 4-3 win in the opener on Tuesday while Santana added a two-run shot in the 5-3 victory in the nightcap.

James McCann homered for the second time in as many starts in the latter contest, which resulted in the third straight loss for the White Sox.

"It's frustrating. Whether it's a 60-game season or 162-game season, you want to get off to a good start," McCann said, via the Chicago Sun-Times. "The pressure is a little more in a 60-game season. We know there is a sense of urgency."

Speaking of catchers, Cleveland's Roberto Perez is being evaluated for right shoulder soreness. The Indians are expected to announce the results on Wednesday.

"Remember the other day when there was the ball that went to the backstop and he went and got it and made a throw to first, and he slipped?" Indians manager Terry Francona said. "He kind of jammed his shoulder and I think as time progressed, I think he thought it would loosen up and it really didn't."

Cleveland selected the contract of fellow catcher Beau Taylor prior to the nightcap on Tuesday.