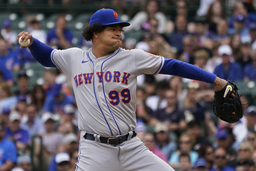 The first-place New York Mets, who will go for a three-game sweep against the host Miami Marlins on Sunday afternoon, are starting to get healthier.

That could be scary for their opponents.

Jacob deGrom, who has won two Cy Young Awards, is due to rejoin the rotation on Tuesday against the Washington Nationals. Key reliever Trevor May is due back on Wednesday, and starting catcher James McCann is expected on Thursday. The Mets are also expected to add a reliever and a hitter before the MLB trade deadline arrives Tuesday afternoon.

On Sunday, however, the surging Mets - who have won five straight games and are 9-4 against the Marlins this year - will start right-hander Taijuan Walker (8-2, 2.67 ERA).

With the exception of three-time Cy Young Award winner Max Scherzer, Walker has been the best starter on the Mets this year. Walker has pitched eight straight quality starts, and he has been brilliant since June 1.

The Marlins on Sunday are starting right-hander Pablo Lopez (7-5, 3.03), who hasn't pitched since beating the Cincinnati Reds, 2-1, on Tuesday. Lopez was brilliant in that game, striking out a career high-tying 11 batters. He allowed just two hits, no walks and one run.

"That was really fun," said Lopez, who retired 21 of the final 22 batters he faced. "It's been a while since I felt that good."

Indeed, it was Lopez's first quality start since July 3. Still, the Marlins are 12-8 when Lopez starts this year.

Offensively, the Mets are led by first baseman Pete Alonso (26 homers, 84 RBIs) and shortstop Francisco Lindor (17 homers, 69 RBIs). Lindor has been especially good against the Marlins this year with six homers, including a dinger in Saturday's 4-0 win.

In addition, the Mets got a boost in Friday's series-opening 6-4 win from center fielder Brandon Nimmo, who ended a 5-for-34 slump by bashing a double high off the center-field wall and then pulling a two-run, go-ahead homer in the eighth inning.

Nimmo was clearly emotional as he ran around the bases and also when he reached the dugout, high-fiving his teammates.

"I wanted to come through for the guys," Nimmo said. "I was pretty ecstatic."

Miami's offense, meanwhile, is looking for production from young players such as outfielders JJ Bleday and Jesus Sanchez - who are both 24 years old - and first baseman Lewin Diaz, 25.

Bleday is of particular interest since he was Miami's first-round pick - fourth overall - in 2019 out of Vanderbilt. Since making his MLB debut on July 23, Bleday is batting just .179 with one homer and one RBI.