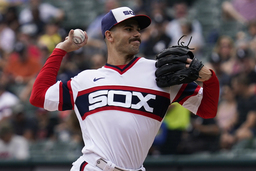 After a walk-off wild pitch propelled them to a comeback victory on Saturday night, the Chicago White Sox look to a pitcher who has been a picture of control as they aim to snag a series win.

Chicago right-hander Dylan Cease (10-4, 2.03 ERA) will start Sunday against the visiting Oakland Athletics and is eager to cap a sterling July with another solid start.

Cease is 4-1 with an ERA of 0.61 in five starts this month after going 2-1 with a 0.33 ERA in five starts in June. That dominance wasn't enough to secure Cease a spot on the American League All-Star team, but he hardly sulked.

Pitching against Cleveland on July 24 in his first start of the second half of the season, Cease scattered seven hits, walked one and struck out four in six shutout innings.

"Just trying to win is enough motivation for me," Cease said. "But I'll take any chip on my shoulder I can get."

In addition to his performances, Cease, 26, continues to impress White Sox manager Tony La Russa with his demeanor.

After rolling to a 7-3 victory in Friday's series opener, the A's had a 2-0 lead entering the seventh inning Saturday. The bullpen couldn't hold the advantage, however.

Gavin Sheets tied the game with a two-run homer in the seventh, then doubled to lead off a ninth-inning rally that saw pinch-runner Adam Engel score the winning run on a Zach Jackson wild pitch.

While Oakland's winning streak ended at four games, the A's would claim their second successive series victory with a win on Sunday.

Seth Brown has three solo home runs in the current series. He connected for two Friday in his first game after the birth of his first child, a son named Cannon.

Rookie right-hander Adam Oller (1-3, 8.07) will start for Oakland on Sunday in his first career appearance against the White Sox.

"It's unreal," Oller said of the milestone. "It only took four months, but we got it. It goes back to all the stuff in between. All the ups and downs through the minor leagues. The long hours in the offseason working. To finally get to this point, it goes to trusting yourself."

Cease took a no-decision in his lone career start against Oakland, allowing three runs and four hits in six innings last August. He has not allowed a run in his past 20 2/3 innings overall.

Tim Anderson, who singled twice Saturday, continues to be active for Chicago as he appeals a three-game suspension stemming from an incident during the seventh inning of Friday's 7-3 loss.

Anderson made contact with plate umpire Nick Mahrley while arguing a call and was ejected from the game.