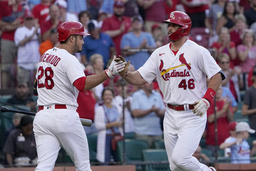 The St. Louis Cardinals will be without their two best players for a two-game set against the host Toronto Blue Jays that opens Tuesday night.

Paul Goldschmidt and Nolan Arenado, both of whom were selected to play the All-Star Game on July 19, have not been vaccinated against COVID-19 and cannot enter Canada. They will miss the short series, along with catcher Austin Romine.

"I've talked to all of them, and I respect it and agree with their decision," Cardinals manager Oliver Marmol said. "I've got zero issues with it."

Without Goldschmidt, the Cardinals are will be missing a player who hit two home runs and had three RBIs in a 6-3 road loss Sunday to the Cincinnati Reds. He has 24 home runs and 77 RBIs on the season and is among the leaders in the National League MVP chase.

"Obviously, not an easy decision," Goldschmidt said. "Over the last year-plus, I've tried to talk to as many doctors and many medical professionals as I could and figured out as much as I could. I just decided the potential risks outweighed the potential benefits. It stinks that I can't play in Toronto. I hate that part of it."

Goldschmidt hit a home run in the All-Star Game at Los Angeles. Arenado skipped the game because of back pain.

The Cardinals, who lost two of three to the Reds, will start right-hander Andre Pallante (3-4, 3.34 ERA) on Tuesday.

His only career appearance against Toronto came May 23 at St. Louis, when he entered the game in the seventh with the bases loaded and allowed two walks before ending the inning on a groundout. St. Louis won the game 7-3 on Goldschmidt's game-ending grand slam in the 10th inning.

The Blue Jays, who are coming off a three-game road sweep of the Boston Red Sox, took three of four games last week at home against the Kansas City Royals, who were without 10 unvaccinated players.

The Blue Jays have won eight of their past nine games and are 7-1 since John Schneider took over as interim manager.

"We've been through some tough spots and right now is more of what we're expecting and more of what we're hoping for going forward," Schneider said. "All the respect in the world for (Boston) but to come in here and play like this ... that's what we're trying to do."

The Blue Jays outscored the undermanned Red Sox 40-10 over the three games, including a 28-5 trouncing on Friday and an 8-4 victory on Sunday. Boston helped Toronto with poor fielding.

"I feel like we did what good teams do when they see and sense a weakness in a team," said Blue Jays pitcher Ross Stripling, who allowed two runs in four innings on Sunday. "That Red Sox team is obviously riddled with injuries and are obviously not playing as well as we know they can.

"We took advantage of it and we swept them here in Fenway. That's what good teams do when they smell blood in the water. They get after it. It's just a really good way to start off the second half."

Cardinals left-hander Steven Matz, a former Blue Jay, will miss the series after was diagnosed with a torn medial collateral ligament in his left knee, sustained while trying to field a dribbler up the first base line on Saturday. He could be lost for the season.