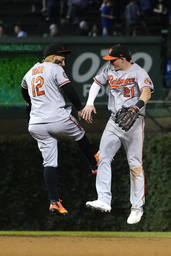 The Baltimore Orioles have been one of the most surprising teams of the first half of the season, but they're not content with being a feel-good story.

The Orioles look to take another step forward when they begin a three-game series against the Tampa Bay Rays on Friday in St. Petersburg, Fla.

Baltimore carries a 10-game winning streak into the series and sits one game above .500 (45-44) following a 7-1 victory over the Chicago Cubs on Wednesday.

"Every day we show up to the field, we feel like we're going to win the game and we should win the game," Baltimore outfielder Austin Hays said. "That's a feeling we haven't had here the last few years. That alone just breeds confidence with every guy in the locker room, knowing that when you show up, you have a chance to win every game."

The Orioles hope to extend their win streak against a Tampa Bay team that completed a four-game sweep of the Boston Red Sox on Thursday.

Rays shortstop Taylor Walls has battled a season-long slump, but his recent play has been encouraging. He drove in two runs in Tampa Bay's 5-4 victory on Thursday and has reached base safely in 10 of his past 11 games.

"I think we're going to see the best of Taylor Walls going into the second half and certainly in the second half," Rays manager Kevin Cash said. "You've got to think he's feeling better at the plate with his recent results."

Tampa Bay is expected to activate Luis Patino (0-1, 13.50 ERA) from the injured list in time for the Friday start. The right-hander has been out since leaving in the first inning of his season debut on April 11 due to a left oblique strain.

Patino, 22, made six minor league rehab starts and allowed seven runs over 17 1/3 innings (3.57 ERA). He likely will be limited to no more than three innings on Friday. Patino has faced the Orioles just once previously, when he allowed four runs in 3 1/3 innings during a no-decision on May 18, 2021.

The Rays hope Patino can fill the rotation spot vacated by Shane Baz, who was placed on the 15-day injured list on Thursday due to a sprained right elbow.

Baz will receive an injection before resting and rehabbing for at least the next four weeks.

"Disappointed for Shane, for sure," Cash said. "You don't want to see guys get injured, and we've had our fair share."

Baz is the Rays' 17th player on the injured list, tied with the Cincinnati Reds for the highest total in the majors.

Right-hander Tyler Wells (7-4, 3.28 ERA) will take the mound for Baltimore in the series opener. He allowed three runs over four innings against the Los Angeles Angels on July 8 in his most recent start.

"He's got multiple pitches to go to and he's got confidence in all four," Orioles manager Brandon Hyde said. "So, it's really unpredictable, tough on the hitter and he's got such good fastball command that he's able to pitch at the top of the zone or the bottom of the zone, in and out, works ahead, just doing everything right now."