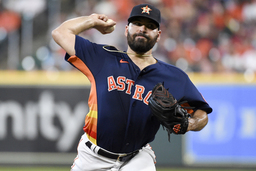 Houston Astros manager Dusty Baker had two options to be his starting pitcher for Game 2 of the World Series, and he decided to push back the hotter pitcher to Game 3.

Instead of opting for rookie right-hander Luis Garcia, who dazzled in Game 6 of the American League Championship Series against the Boston Red Sox, Baker tabbed right-hander Jose Urquidy to start against the visiting Atlanta Braves on Wednesday.

Urquidy made his last start of the regular season on Oct. 3 against the Oakland Athletics and didn't appear in Houston's AL Division Series victory over the Chicago White Sox. The extended stretch between appearances might have played a factor in his performance in Game 3 of the ALCS against the Red Sox on Oct. 18.

Baker opted to give Garcia an extra day of rest, leading him to tab Urquidy to start Wednesday.

"I was told a long time ago that the pitchers rust out before they wear out," the manager said. "So it was twofold. Just give one rest and one to give work."

The Astros, down 1-0 in the best-of-seven World Series following a 6-2 loss Tuesday, hope Urquidy can mimic his only previous World Series start. He worked five scoreless innings and allowed two hits with four strikeouts in an 8-1 victory over the Washington Nationals in Game 4 of the 2019 Fall Classic.

"That game I was a little nervous," said Urquidy, who finished 8-3 with a 3.62 ERA over 20 starts during the 2021 regular season. "I mean, in the first inning, I think I was a little nervous. But during the second inning, I started to feel more confidence. (Robinson) Chirinos was catching me that day, and he was talking with me about (concentrating) and (being) focused on my throws."

Urquidy also had a scoreless, two-thirds-of-an-inning relief outing in Game 7 of the 2019 World Series.

The Braves will counter with ace left-hander Max Fried, who is 1-1 with a 3.78 ERA over three starts this postseason. Fried has incrementally constructed a well of postseason knowledge, with past triumphs and failures shaping his mental approach to each starting assignment.

After tossing six shutout innings at Milwaukee in Game 2 of the National League Division Series, Fried allowed two runs on eight hits with five strikeouts over six innings in the Braves' 3-2 victory over the Los Angeles Dodgers in Game 1 of the NL Championship Series.

However, with Atlanta looking to clinch the NLCS in Game 5, Fried allowed five runs on eight hits and two walks in 4 2/3 innings during an 11-2 loss.

Fried is 1-2 with a 3.86 ERA over 15 career postseason appearances (seven starts). He knows how to approach what comes next.

"Really just not trying to do too much," Fried said. "I think that's any time that I kind of get outside of that and maybe trying to make -- you know, throw a little bit harder or throw a ball by a guy, you know, just things that really just allow myself to get too big in the moment rather than just looking at the glove and focusing on the glove and executing that pitch right then and there."

There is a heightened sense of preparation against the Astros, whose collective postseason experience will provide a specific challenge for Fried, especially after the Braves won Game 1.

"About the Astros' lineup, it's a really good team," Fried said. "They take really good at-bats. They're going to make you throw strikes. They're not going to chase a ton. They've obviously been here. They've been in the moment. They've played a lot of playoff games."