Giants close in on division title as Padres visit 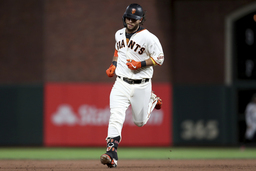 Provided they get a little help from the Milwaukee Brewers, the San Francisco Giants could have a chance to clinch their first National League West crown Friday night when they open a three-game series against the visiting San Diego Padres.

Riding a six-game winning streak, the Giants (105-54) will take a magic number of two onto the field with them against the Padres, needing a win coupled with a loss by the Los Angeles Dodgers (103-56) at home against Milwaukee in order to pop the champagne.

The Giants would clinch no worse than a tie for their first West title since 2012 with either a win or a Dodgers loss.

The Giants and Padres (78-81) will be meeting for the eighth time in the past 19 days, with San Francisco holding just a 4-3 edge in the recent head-to-heads.

The veteran has since given up four runs in 10 innings in starts against Atlanta and Colorado, getting a loss in a 3-0 setback to the Braves and a no-decision in a 7-2 victory over the Rockies.

DeSclafani won't have a fresh bullpen backing him as Giants manager Gabe Kapler had to pull Thursday's starter, Scott Kazmir, due to injury during a three-run Arizona Diamondbacks first inning.

San Francisco got 8 2/3 innings of one-run ball from six relievers, including eighth-inning setup man Tyler Rogers, who worked the eighth and ninth in a tie game before the Giants walked off a win on a LaMonte Wade Jr. single.

"We've talked all year about using the resilient word to describe this team. That's precisely how I kinda described (the team) in this game," Kapler gushed after the 5-4 win. "We responded and were tough enough to climb back in and ultimately got a big hit there at the end."

San Diego, which has had trouble piecing together a healthy rotation down the stretch, did not announce a starter for the opening of the Giants series following its 8-3 loss to the Dodgers on Thursday.

The Padres have lost six in a row and 11 of 12. In fact, their last three wins all came against the Giants, including two straight to finish a 2-2 split the last time they visited San Francisco.

A full 27 games out of first place in the West after having led the division on May 30, the Padres have little left to play for other than helping promote Fernando Tatis Jr. for NL Most Valuable Player honors.

Tatis hit his NL-leading 42nd home run Thursday against the Dodgers. The two-run blast that measured 467 feet and flew completely out of Dodger Stadium was his first homer and first RBIs since he belted a solo shot off Jarlin Garcia in an 8-6 home loss to the Giants on Sept. 22.

The record-breaking shortstop has gone 16-for-54 (.296) with four homers and seven RBIs this season in 14 games against the Giants.

He is just 1-for-12 in his career against DeSclafani, but that lone hit was a home run in a 2019 game between the Padres and the Cincinnati Reds.

With most fans in the stands sure to be rooting for more Padres misery as the Giants attempt to clinch a division crown, Tatis is focusing on his own business.

"You've got to learn how to ... silence all the voices and be you," he said. "I feel like I've done a pretty great job this year of doing that."